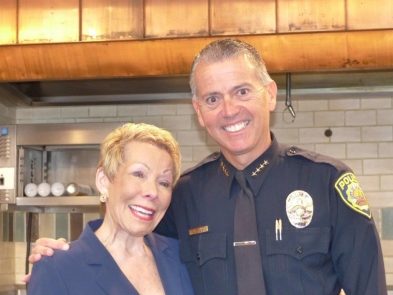 Vasquez has been serving as Chief of Police for a year and says that he felt welcomed in the community.  “It didn’t take me long to feel good about the decision I had made,” he said of leaving the San Diego Police Department to become La Mesa’s top law enforcement officer. He assured everyone at the breakfast that La Mesa has “a very good police department” because of the men and women serving on the force.

However, he noted that auto theft is on the rise county-wide.  When asked why crime is rising, Vasquez said that there are a lot of theories, including early prison release necessitated by state mandates to ease overcrowded prisons.

Vasquez talked about the La Mesa Police Department’s community outreach. That includes the Citizen’s Academy, which gives ordinary citizens the opportunity to see what being a police officer is like, as well as the Youth Leadership Academy, which gives high school students the same opportunity--also teaching them core values over a period of four days.

An important thing Vasquez addressed was the “police image.”  He noted, “It’s taking hits nationwide,” addressing the shootings of several black youths by police in Ferguson, Baltimore and other areas around the country.  He believes that partnering with the community every day is a major part of police work.  He constantly stresses professionalism to his staff.

When asked by an audience member what the department is doing about the homeless population and littering, Vasquez said that unfortunately, there are almost no resources for homeless people.  If they litter, police will contact CalTrans or Public Works for shopping cart returns.

ECM’s editor Miriam Raftery asked about Nixle alerts, and whether having prompt notification to the public is leading to tops that solve crimes. Vasquez responded that he is a big supporter of technology.  Besides the alerts, citizens have helped solve crimes by taking photos including license plates of suspect vehicles. “Sometimes we’re waiting for them when they get home,” he says of the perpetrators.

In response to the issue of body cameras, Vasquez said that  he supports them and believes that eventually, all police departments nationwide will have body cameras.  Some departments in San Diego already have them or are in the process of testing them, he added.