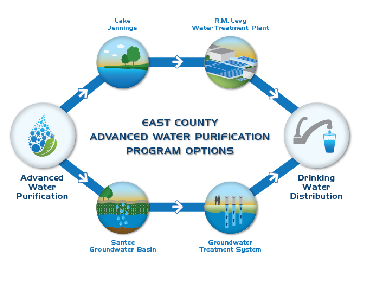 December 23, 2018 (Santee) -- Based on future cost projections that involve multiple agencies and variable prices such as power and labor, the Advanced Water Purification Program still makes sense and is worth pursuing, staffers from Padre Dam Municipal Water District told its board this week.

Jassoy and several other district staffers presented a financial update on the costs for buying water, treating wastewater, and how those escalating costs could be reduced by building a massive reclamation system that essentially converts sewage to potable water. Once built, the system is expected to provide up to 30 percent of the area’s water demands.

Yet water district directors familiar with such metrics seemed pleased by where the trends were heading, and how the numbers supported their decision to moving ahead with the AWP.

Director Doug Wilson said while there isn’t any possible way to know exactly what costs would be so in the future, what he sees makes it clear the project pencils out. “I’d expected these numbers to be higher to begin with,” Wilson said. “And even if they were, I’d still be supporting it.”

The presentation was purely informational; no vote was taken.

The financial update didn’t reveal the costs for building the system, but Melissa McChesney, the district’s spokeswoman, said the most recent cost estimate is about $500 million. That cost will be shared by three other partners: Helix Water District, the city of El Cajon, and San Diego County, and be allocated according to how much each of the agencies use the system.

According to the program’s website, www.eastcountyawp.com, the estimated cost for Phase 1 of the project is $206 million, and for Phase 2 at $254 million. McChesney said the plan calls for the project to be built using a design-build arrangement, meaning design and construction services are contracted with a single entity. The method contrasts with going out to bid for a variety of services such as architects and electrical services, as well as selecting from a list of qualified vendors.

The plan also combined Phase 1 and 2 being constructed at the same time, and the tabling of Phase 3, McChesney said. The project is slated to begin construction by the end of 2020.

According to a detailed feasibility study for AWP done by Kennedy/ Jenks Consultants and dated January 2016, the chosen Alternative 3 had capital costs of $495 million, and operating and maintenance costs of $412 million, bringing the total costs to $906.8 million.

At the Dec. 19 board meeting, Padre Dam directors noted the much larger Pure Water Project, which will do much the same sewage to water reclamation for the city of San Diego on a much larger scale, is now under way. Director James Peasley, who is a member of the Metropolitan Wastewater Joint Powers Authority, said that project has spent $1.44 billion so far, including $1.1 billion for construction.

The first of three planned reclamation plants for Pure Water in the Miramar area is scheduled to open in 2021, and expand the city’s water production by about 30 million gallons daily. The East County AWP is planned to convert some 15 million gallons of wastewater into potable water using the same type of high tech treatment and recycling system.

McChesney said the financial update presented to Padre Dam directors showed gradual increasing cost trends for both wastewater expenses and for importing water. By building AWP, the region would clearly offset the higher costs for treating sewage, and over time, cut the costs on importing water. Padre Dam must import all of its water through the County Water Authority, which in turn gets it from the Metropolitan Water Authority.

How this major capital improvement would impact local water rates has yet to be determined, but diverting wastewater to the reclamation process could actually cut those costs, she said.

The district has secured a $101 million loan (at 1.7 percent interest), and a $15 million grant for the AWP from the California Water Resources Control Board, and is applying for other grants and financial assistance for the project, McChesney said.

Final approvals for AWP hasn’t been secured yet, but all the partner agencies are working in concert through a joint powers agreement. There is still time for any of the partner agencies to pull out of the plan if they feel it’s not in their best interests, McChesney said. Should that happen, it could impact the project’s viability, she added.

Padre Dam, which serves Santee, El Cajon, Lakeside, Flinn Springs, Harbison Canyon, Blossom Valley, Alpine, Dehesa, and Crest, charges some of the highest water and sewer rates in the county. That is mostly due to the 72-square mile delivery area, and pumping water to higher elevation areas.

Last year, Padre passed a five-year rate schedule that increased its combined water and sewer rate for an average single family house to about $155 per month. In October, the Padre Dam board voted to freeze that schedule for next year, stating that higher water sales and the addition of new customers, including the Sycuan Band of the Kumeyaay Nation, enabled the district to put a temporary halt to the higher rates. 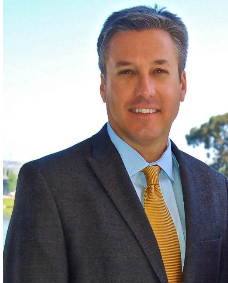 In other business, the five-member board unanimously approved a 5 percent raise to its CEO/ General Manager Allen Carlisle (photo, left). His hourly salary was boosted to $113.82 for a total compensation of $248,581 annually, according to the agenda item. The item generated no comment.

I've read in some places that erecting a dam can be very detrimental to the environment. Whether or not it's affordable, its impact needs to be taken into consideration too I think!