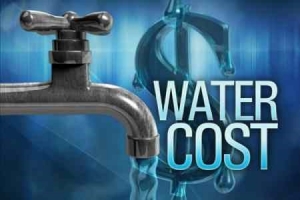 May 18, 2017 (San Diego’s East County) - Padre Dam Municipal Water District, already charging among the highest water rates in the nation, is proposing yet another five-year rate increase that officials say is necessary to maintain the agency’s services.

In a 12-page notice sent out to all of Padre Dam’s 24,000 customers, the district outlined the rate increases depending on use, and the rationale supporting the increases.

Starting in November, an average residential customer in Padre Dam’s district should expect their combined water and sewer monthly bill to rise to $154.75, up $3.74, or nearly $45 annually.

The rates change for condo owners, apartments, and commercial customers, but would trend up through 2021.

The new rate structure requires a majority approval of the elected five-member board of directors who will preside over a public hearing June 21 at 6 pm at the district’s headquarters at 9300 Fanita Parkway.

It didn’t take long for customers to lodge their displeasure about the prospect of paying more on their monthly bills. Padre Dam spokeswoman Melissa McChesney said notices were sent out May 4, and by May 12, the district received 14 calls asking questions, or making complaints.

“People are upset especially because many of them are using less water,” McChesney said. “The best way we can explain it is that we have certain fixed costs that don’t go away whether we sell 16,000 acre feet of water, or 9,000 acre feet.”

The biggest of those fixed costs that is constant is the maintenance and replacement of the district’s 389 miles of pipes.

Padre Dam also incurs higher costs because it has to pump water up to more than 2,600 feet to places such as Alpine and Crest. The pumping stations’ maintenance costs along with paying for all the electricity to run those pumps adds to the costs.

Anther contributing factor is Padre Dam dependence on outside sources for all its water needs. The district gets 100 percent of all its water from the San Diego County Water Authority. Padre Dam also depends on treating all its sewage by the city of San Diego’s Metropolitan Wastewater System.

Finally, Padre Dam is a rather large district of about 72 square miles, but has a limited customer base, much smaller than neighboring districts, resulting in fewer customers to share the increasing costs, McChesney said. 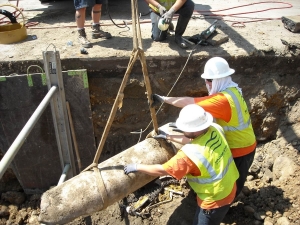 Padre Dam customer Jessie Hughes, a Santee resident, in a posting on Nextdoor.com, a micro news site, said that he planned to send a letter protesting the proposed rate hikes.

“We moved here from San Diego last August,” Hughes wrote. “We pay monthly (in Padre Dam) what we used to pay every other month at our old house. It’s insane.”

Alan Carlisle, CEO for Padre Dam, said if demand for water remains constant, the district’s rates should level off at some point. However, he noted that the costs for transporting, storing, and cleaning water “will continue to increase along with other daily expenses.”

He disputed a report that Padre Dam charged the second highest rates in San Diego County, saying it was either third or fourth highest in the county. He added that it is impossible to compare rates due to factors such as local supply, access, population density, elevation changes, tax revenue and grant-funded capital improvements.

“Each district has unique characteristics and creates an apples to oranges situation when comparing,” Carlisle said.

That didn’t stop one analysis conducted last year by Food and Water Watch (published on the website 24/7 Wall Street), which found Padre Dam’s rates for a typical user to be the second highest of 500 districts surveyed natiowide in January 2015, based on average water use of 60,000 gallons a year. The annual cost for water for Padre Dam customers was stated at $827, second only to the annual water rate for Flint, Mich. at $864. That city’s rates have to considered even more egregious considering residents were receiving water tainted by excess lead levels that resulted in many health problems.

That analysis didn’t include sewage rates, which now cost an average customer about $55 monthly, but are slated to increase to $58.55, starting Nov. 1, if the board approves the proposed rate hike.

McChesney said the district is cognizant about the escalating costs of doing business and is doing whatever it can to keep its costs as low as possible. In 2011, Padre Dam reduced its staff by 19 percent. She said staff at the district about 10 years ago was 142; today it’s about 114.

Padre Dam is holding three community meetings before the June 21 hearing to explain about the proposed rates, and give residents a chance to ask questions.

Regarding rates, the comparison used county-wide is not a scientific analysis.  It’s a simple calculation of a water bill for a ¾” meter using 9 HCF per month.  This can be considered a “typical” customer in an normal residential home.  When you look at both fixed and variable charges combined, a “ranking” can be established for San Diego County.  Remember, this is not scientific and does NOT take into consideration all of the unique characteristics of each agency (ie. locally owned water supply, elevation, etc.). This is why I say it’s comparing apples to oranges.  However, it is a baseline that is used by a number of agencies on occasion.  There is no formal report as these figures change weekly almost.  Here is the latest info (March 2017) we have for the top 7 agencies in  San Diego… again based on 9 HCF/month.