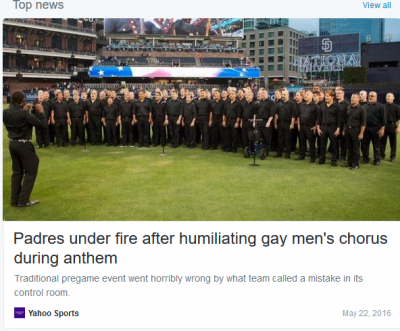 Update, May 23, 2016: The Padres  issued a new statement indicating their investigation found no evidence of malicious intent, however based on the unintentional mistake and failure of those with oversight to immediately intervene, "we have terminated our relationship with the third-party contractor who was responsible for the error, and taken disciplinary action against our employee who was responsible for the game production...We once again sincerely apologize to members of the San Diego Gay Men’s Chorus, their families and those who came out to support their Pride Night performance. The  Padres organization is proud of our longstanding commitment to inclusion – within both our sport and our community. We deeply regret that a mistake on our part has called this into question, but accept full responsibility.”

May 22, 2016 (San Diego)—When 100 volunteer members of the San Diego Gay Men’s Chorus  took to the field Saturday night to sing the national anthem at the San Diego Padres vs. Dodgers game,  their microphones were inexplicably off . A recording of a woman singing the Star Spangled Banner was played over the loudspeakers instead of the men's voices.

No announcement or explanation was offered.  Afterwards, the stunned performers were ushered off the field and heckled by baseball fans shouting homophobic taunts including “You sing like a girl,” according to a post on the group’s Facebook page by Bob Lehman, director of the Chorus.

The San Diego Union-Tribune posted video of the incident along with a terse apology issued by the Padres on Twitter which states that during the pregame ceremony,  “a mistake was made in the Petco Park control room that prevented the San Diego Gay Men’s Chorus from performing the National Anthem as scheduled. We apologize to anyone in the ballpark who this may have offended, and have reached out to the Chorus to express our deep regret for the error.”

Yahoo News reports that the chorus has performed at Padres games in the past. Hear a prior performance of the chorus singing the national anthem here: https://youtu.be/6r_x7EjpToE

However the incident has sparked outrage in San Diego’s LGTB community and nationwide.

“What should have been a night of joy and celebration at Petco Park last night instead dturned into a nightmare raising serious questions about homophobia within the San Diego Padres organization and its relationship with the LGBT community,” a post on the San Diego Gay Men’s Chorus Facebook page states.

Three days earlier, according to the Chorus post, Padres representatives “aggressively sought to prevent singers from performing the national anthem unless they purchased a ticket to the game—even if they did not plan to stay for the game—which was not part of any previous discussion or written or verbal agreement and would have cost the small, community-based nonprofit thousands of dollars. The demand was eventually rescinded on Friday following repeated complaints made by SDGMC and San Diego Pride to San Diego Padres management.”

The San Diego Men’s Chorus is not satisfied with the Padres apology. The group is calling on the Padres and Major League Baseball to launch investigations to determine if the action was an intentional act of anti-gay discrimination or possibly even a hate crime done for the purpose of ridiculing the gay men.  The Chorus is also asking the City Attorney’s Office and Human Relations Commission to probe the incident.

The post on the Chorus’ Facebook page attracted hundreds of comments, all voicing support for the group and outrage at the Padres’ actions.   Gay choral groups from as far away as Chicago expressed solidarity with the San Diego singers.

Some posters suggested additional actions, including complaints to the U.S. Justice Department or a lawsuit against the Padres.   One poster observed, “Homophobia is getting worse in this country, as is racism.”   Another observed that “professional sports is not ready to embrace the gay culture.”

Some posted choice adjectives for the Padres’ actions including ”disgusting,” “hateful” and “shocking.”

Several said they would no longer be buying Padres tickets or rooting for the team.

The San Diego Gay Men’s Chorus says it welcomes Padres President Mike Dee’s apology and offer to meet with LGBT leaders to discuss the incident.   “We believe it is important to work together with the San DIego Padres organization to build bridges within the LGTB community rather than burn them down as happened last night.”

But the group makes clear in its post that members remain disappointed by the Padres brief public statement which “did not appropriately address the gravity of the situation nor pay due to the 100 volunteers who took to the field in celebration and were led off in humiliation.”

In short, when it comes to the botched handling of both the sound system and the aftermath of the debacle, the Padres thus far have struck out.

Jayne Kerner offered this conclusion in her response to the San Diego Gay Men’s Chorus Facebook page:  “The Padres and their fans who heckled you are the real losers,” she wrote. “They let fear rob them of the opportunity to hear your beautiful voices pay homage to our country. You are the winners…showing grace through adversity!”

We don't buy your "mistake" regarding a vital San Diego community, Padres. It was obviously a deliberate slam.