August 20, 2019 (San Diego) - In a northern California valley stretching under miles of bright blue sky between two snowy volcanic peaks, Mt. Lassen and Mt. Shasta, Daniel Dahle is known as a godsend, a friend, a lifesaver, a companion until the end.

For more than three decades, “Doc” Dahle has been the physician in Bieber, serving a region about the size of five smaller U.S. states. When he started, he was one of five doctors in the region.  Today he is joined by only one other full-time physician.

At 71, Dahle has delayed retirement for years — waiting for someone to take his place.

“I was going to retire November 8th of last year; it was going to be a third of a century,” he said. “It’s tough to recruit young new vibrant family practitioners or internists or pediatricians to come up here.”

Unfortunately, Dahle’s situation is not unique.

California is facing a growing shortage of primary care physicians, one that is already afflicting  rural areas and low-income inner city areas, and is forecasted to impact millions of people within ten years. Not enough newly minted doctors are going into primary care, and a third of the doctors in the state are over 55 and looking to retire soon, according to a study by the Healthforce Center at UC-San Francisco.

That means by 2030, the state is going to be in dire need of physicians. Studies show the state could be down by as many as 10,000 primary care clinicians, including nurse practitioners and physician assistants. Some areas — the Central Valley, Central Coast and Southern Border region — will be hit especially hard. So too will be remote rural and inner-city residents, communities of color, the elderly, those with mental illness or addiction, and those without health coverage.

Many people will be forced to wait longer for doctor visits, travel longer distances to see someone, and may become so discouraged they forego preventative care and even care for chronic, serious disease until emergency treatment is necessary.

The federal government’s Council on Graduate Medical Education recommends 60 to 80 primary care doctors per 100,000 people. Statewide in California, the number already is down to just 50 per 100,000 — and in some places it’s even lower:  down to 35 in the Inland Empire and 39 in the San Joaquin Valley, according to a report from The Future Health Workforce Commision.

Among the causes of the physician shortage:

UC Davis Medical School Dean of Admissions and Outreach Mark Henderson said his medical school is focused on trying to eliminate the shortage between Davis and the Oregon border.

At Davis, where there is a focus on primary and rural care, about half of graduates go into primary care. But at most other medical schools, that percentage is 20 to 30 percent and it’s not enough.

“We still don’t take enough students from (rural and underserved) communities that will have a deep desire to want to go back to the community,” Henderson said. “You have to take a different type of a student, you can’t take the same old usual suspect.”

New doctors “take these specialty areas that pay higher, and that leaves us with a shortage of primary care physicians including pediatricians, internists, family practice physicians and OB/GYNs,” said John Baackes, CEO of LA Care Health Plan, which has the largest number of Medi-Cal members in the state.

He said in rural areas, veteran doctors who are solo practitioners are having a hard time bringing in new doctors to take over.

“Young doctors are increasingly going to salaried positions” at institutions such as Kaiser, said Baackes. 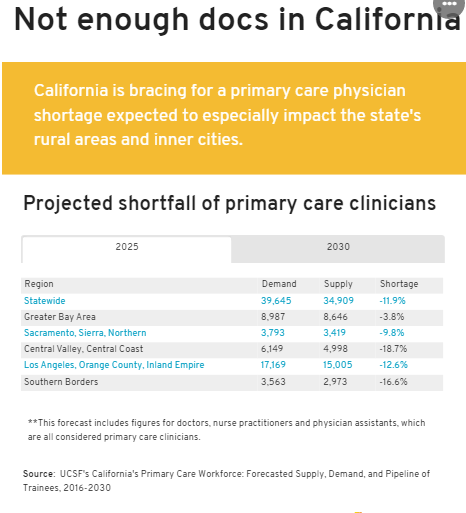 “It’s difficult for physicians to support a practice in that environment and organized medical groups are not attracted to the community because of low (Medi-Cal) reimbursements,” she said.

The California Future Health Workforce Commission — made up of business, elected and health care leaders — released a reportearlier this year warning of the looming shortage of health workers to meet the needs of the “growing, aging and increasingly diverse population.”

“If we’re looking to the future in a state where we have everyone covered, we can’t do it with the workforce we have and we are not doing it well now in many places,” said Assemblyman Jim Wood, a Santa Rosa Democrat who was part of the commission.

The commission found that already 7 million Californians live in federally designated Health Professional Shortage Areas because they lack primary care physicians, dentists and mental health professionals. Most are in the Inland Empire, part of Los Angeles, the San Joaquin Valley and in remote parts of the state, like where Dahle practices.

He tries to assist the next generation of providers: He takes physician-assistant trainees nearly year-round from the University of Iowa, where one of his former physician assistants runs a program.

“These guys are smarter than me already,” Dahle said. “Actually, we teach each other. We teach them the art of medicine and they teach me all the new science of medicine. It works out really good.”

The trainees live with Dahle in his log cabin on 160 acres just outside of town, down a 5-mile dirt road. His dog Clint, a Pyrenees he rescued, eagerly awaits him each afternoon.

Inevitably, country doctors have to be able to do more with less — and be willing to live far from urbanity.

“The younger generation of providers, they don’t have the clinical skills or know-how. They’re not trained the same as Dr. Dahle,” said Shannon Gerig, CEO of Mountain Valleys Health Centers, which operates seven centers across 6,000 square miles in the northern part of California including in Bieber, where Dahle is the lone doctor at that center. “It’s a scary thing for them to come out and be so remote, and know that they are going to be solo a lot, and they are going to be depended on by the mid-level staff…and they don’t have specialty (doctors) around them.”

Dahle has birthed thousands of babies, diagnosed cancers, done skin biopsies, assisted in minor surgeries, attended to patients on their deathbeds and occasionally rushed out into the forest or to a ranch to treat those whacked by a falling hay bale, a downed tree or a stubborn horse. He once finished a pelvic exam by flashflight because the power went out, did minor toe surgery in his office while taking direction from a surgeon on the phone, and jumped in a helicopter transport to accompany a patient with a broken neck enroute to a far-away trauma center.

He also works in the Fall River Mills’ emergency room one 24-hour shift a week, and makes hospital rounds first thing most days.

One recent morning, he greeted and joked with Wilma Chesbro, 88, who used to be an operating room scrub nurse with Dahle, and now is a patient in long-term care.

She grasped his hand, reminding him that when they first met decades ago she thought he was a “yokel” because he’s from a local town. But Chesbroe cried and lost her breath every time she tried to express just how much Dahle meant to her.

“He’s brilliant,” she said through her tears. “But he doesn’t show it. I have so much respect for him.”

Earlier this year he was named Country Doctor of the Year by AMN Healthcare, the largest health staffing agency in the country. The welcome sign to Bieber announces it has 510 residents; the health centers there cater to about 17,000 residents across several towns.

Much of the area is designated “frontier” by the federal government because so few people live there. Beiber has one motel, and passersby who blink might miss the Big Valley Market, where Dahle gets a maple bar for breakfast most days. Fields and ranches dot the wide-open valley, giving way to forests and rising peaks. The nearest Safeway grocery store is in Burney, 40 miles away. The isolation has made some prospective physicians make a U-turn and drive away, without ever stepping foot in the clinic for their scheduled interview. Many have told Dahle their spouse or partner saw the town and said “no way.”

Doc Dahle grew up in nearby Tulelake, the son of a potato farmer. He was drafted from college to Vietnam. Later he finished college at Oregon State, then was turned down for medical school there four times before he was accepted at the University of Rochester. When he graduated he returned to northern California to practice. His cousin is Brian Dahle, a GOP state senator who represents the area.

But Doc Dahle may just be the better known of the two. Thousands of  residents in these parts go out of their way to see him.

“Patients are fine waiting, because they know when they see Dr. Dahle he will take whatever amount of time he needs to talk with them, to get the care they need. I guess you’d call it old school,” said Gerig, who was Dahle’s patient before becoming his boss.

She began working as a registered nurse with Dahle 25 years ago, and he delivered her three babies via C-section. It seems everyone has a connection like that. At a local bar, a group of guys ticked off what Dahle has done for them — one called him a “lifesaver” for diagnosing a 99 percent carotid artery blockage.

This is why Dahle is fired up about finding his replacement. This is his “family,” he said.

He’s got his eye on a young doctor couple out of Davis. But there is one hitch. The local hospital in Fall River Mills, just about 25 miles up the road, closed its obstetrics unit, forcing pregnant women go at least a hundred miles to Redding or Shasta to deliver.

Unless the hospital reopens that wing, Dahle may not be able to land the couple despite their interest. The husband is in primary care and has already filled in at Dahle’s clinic, but the wife, who is from Fall River Mills, is training to be an OB-GYN.

“We’re not going to be able to recruit these homegrown kids to come back here without something changing,” said Dahle. “We have got to do this for our community.”

That’s the reason he’s sticking around, for the community and to work on bringing the couple back home.

“I love my job,” said Dahle, who is twice divorced, acknowledging it was always hard to stay married because he is wedded to medicine. “I have never regretted ever being a doctor.  Everyday I go to work and say that I help somebody.”

If he ever does retire, he plans to to scuba dive, hunt rocks and travel.

But he’ll still probably have lunch on Tuesdays at the Roundup Bar, just like he does now for the hot dog special. Sometimes, if someone sees Dahle heading over, they’ll call the bar and buy Dahle’s beer.

“He’s a staple in our community. He holds us all together,” said bar owner Scott Johnson.“This is like his second office. He comes here and everyone gathers round and asks him questions to avoid a doctor visit.”