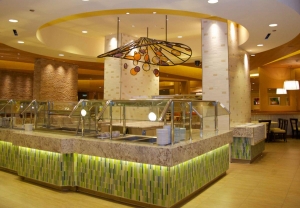 June 11, 2011 (El Cajon) – Paipa’s Buffet restaurant has reopened in a new location within the Syucan Casino. The restaurant, which is entirely smoke-free, has been renovated with a new kitchen, seating for 320 people, more specialty food stations and new design elements.

The remodeled buffet is the first of several stages in a major casino remodel. Next up, GameDay Sports Bar & Grill, a new sports bar featuring casual fare such as pizza and hardwood-smoked barbecue specialties, is slated to open August 31.

Other renovations include upgrades to the poker and off-track betting rooms, bingo pavilion, gift shop and a dramatic 15-foot lighting feature in the atrium with LED lighting spilling down to create the illusion of water—the first feature of its kind in San Diego.