“I am a child of Afghan refugees,” said Habib, whose parents came to the U.S. during the Soviet-Afghanistan War in 1981. Knowing what it’s like for a family to lose everything, he asked a friend involved in relief efforts how he could donate three bags of his clothing to Pakistan flood victims. Then he posted a notice on Facebook asking 500 friends for more help.

“It was an amazing response,” Habib told East County Magazine. He now has 1,500 Facebook friends and is joining efforts with people in Los Angeles, Orange County, and the Bay Area nonprofit Hadiya to collect tents, blankets, clothes, and more for flood victims. “It really goes to show you the power of social networking. “ 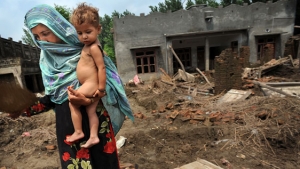 The need in Pakistan is critical, he said. “What they are afraid of is the onset of water bourn illnesses.” Tents are especially needed, along with the supplies listed above as well as antibacterial soaps, medical supplies, vitamins, and hygiene kits.

View a news video of Pakistan flooding showing the vast scale of devastation.

Locally, volunteers are needed to collect bags in various communities. In addition, regional drop-off locations are needed. “We need help from nonprofits, churches, synagogues, mosques, businesses—anybody willing to give us space.”

Samira Khan, a local doctor, and Nadia Ebrahim, a woman he never met before, agreed to help coordinate drop off locations. “We are joining with the Orange County and L.A. community,” said Habib, who used his software management skills to solve some logistical challenges. The group plans its first shipment of goods to Los Angeles via trucks on August 28th, with ongoing relief 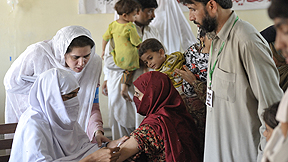 “It is complete chaos over there,” said Habib, adding that early relief efforts began with the Pakistani military. Now international aid groups, such as Unicef (photo, left) are on the ground working desperately to save lives.

Secretary of State Hilary Clinton today pledged another $60 million in U.S. aid, bringing the total to $150 million. “The flooding has already affected more people than the Indian Ocean tsunami, the Haiti earthquake, and the 2005 Pakistan earthquake combined,” she told a plenary session at the United Nations. “And as we meet, we fear that anew wave of water may be about to sweep through areas that have already been devastated by the floods.” Clinton called on Americans to contribute to the Department of State’s Pakistan Relief Fund. 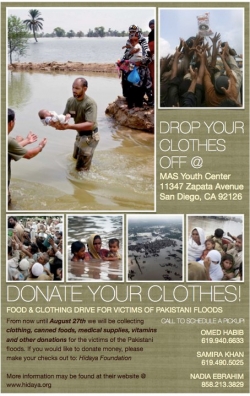 Other San Diego groups are also trying to help. Tasneem Kassamali, an ECM intern, reported, “My mosque is even spreading word during the month of Ramadan.” Members are being asked to donate sadaka, or money saved to give to those in need, to aid in Pakistan flood relief efforts.

Health officials have confirmed at least one case of cholera in northwestern Pakistan and diarrhea and skin disease have started to spread, the International Refugee Committee website confirmed today. The United Nations has warned that a shortage of aid money is threatening six million people, the majority of them children and infants, with potentially lethal diseases carried by contaminated water.

That includes the Azakhel Camp, a haven for Afghans fleeing war in their homeland. “What are we going to do now?” one Afghan refugee asked, Peter Bero wrote on the IRC blog. “Once again, we are refugees.” 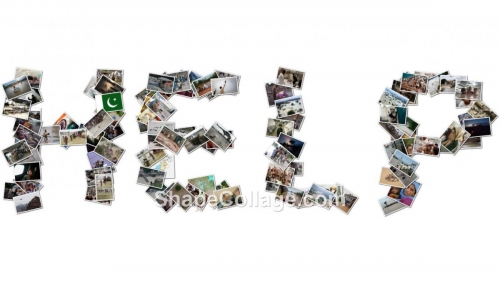