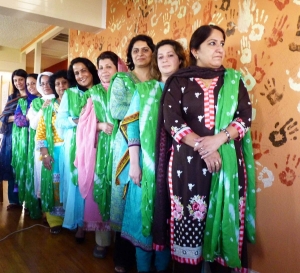 The group primarily works to prevent the youth in their home country from turning to extremism. They are a group of women who want to tell the world that Pakistanis are really peace loving people. 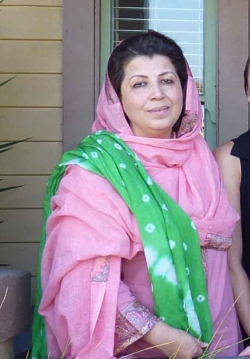 “We want to serve as a model,” said group leader Mossaret Qadeem. She said the group targets Pakistani mothers in order to help their children escape and avoid extremism.

“We use women working on the ground; we have a discourse with the mothers because it is with them that we get to the family,” said Qadeem.

They are also working to introduce a peace curriculum into education in Pakistan.

When asked what can be done to help bring peace to Pakistan, Qadeem’s response was immediate.

“Stop the drones,” she said. “That’s the answer to all the questions.”

Drones, unmanned aerial vehicles used by the U.S. in Pakistan to target and kill suspected terrorists, have proven both effective and controversial.  A New York Times article published yesterday revealed that President Barack Obama makes decisions individually about drone attacks on suspected Al Qaeda leaders.   Concerns have been raised by some over the legality under international law as well as impacts on civilians.

Qadeem referred to the relationship between the U.S. and Pakistan as a marriage of convenience. She said that in the war on terror, Pakistan is siding with the U.S. whether they wanted to or not, yet the victims are her own people.

“The ultimate sufferer is the common Pakistani,” Qadeem said. “On the streets of Pakistan we are being targeted and killed (by drones) …There is physical and psychological suffering, economic and social impacts.”

These women, all leaders in their fields, hope to change that situation through diplomacy.

“Women are very much in front in Pakistan – they are politics, everything,” Qadeem observed, but acknowledged that culturally, “women are subordinate to men.”

However, their subordinate status does not stop the women of Amn-o-nisa from spreading their message.

Qadeem said the group formed very naturally. The women were all working individually in the field for years before they came together to form Amn-o-nisa.

“She is the dreamer,” Chughtai said.

Quoting the late Martin Luther King Jr., Qadeem replied, “I have a dream.”

She smiled and continued, “I had a dream and I put that dream into action.”

The result was Amn-o-nisa, which the women said is still in the beginning stages. They refer to the group as a crawling baby that still has much to accomplish.

However, their mission is one that must be approached with caution. The women of Amn-o-nisa are constantly at risk, so much so that their work cannot be done in the open.

“If you want to save lives, you have to save your own first,” said Qadeem. “We keep a low profile. We do not challenge anyone over there because we believe in peaceful co-existence.”

The danger in Pakistan is very really for these women.

“All of us are survivors of violent extremism in Pakistan,” said Qadeem. “We are living with the impacts of violent bombers on a daily basis.”

A woman in the group lives on “Killer road” where a professor and another person were recently kidnapped and murdered.

“We are living in fear,” said Qadeem. “Everybody is a victim.”

Yet despite their hostile environment, the women believe that there are peaceful ways to stop violence in their country.

“We have small steps that can lead to larger impacts,” said Qadeem. “We want to bring a ray of hope to the rest of the world.”