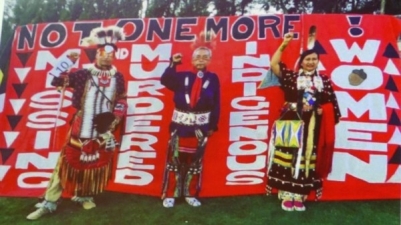 May 6, 2022 (Pala) -- Robert Smith, Chairman of the Pala Band of Mission Indians, joined other tribal leaders on Thursday, May 5th at the California State Assembly to support May 2022 as Missing and Murdered Indigenous People Awareness Month.

“On behalf of the Pala Band of Mission Indians, we thank California Assemblyman James Ramos for helping to shed light on this terrible epidemic that is plaguing the indigenous population,” said Chairman Smith. “Bringing awareness to the crisis of missing and murdered indigenous people throughout California and the United States is an important step in the right direction.”

In 2016, 5,712 missing and murdered indigenous cases were reported to the National Crime Information Center. Homicide is the second to seventh leading cause of death for indigenous women, and indigenous women face murder rates ten times higher than the national average.

In 2019, East County Magazine reported, murder was the leading cause of death for Native American and Alaskan Native women. The ECM article also covered a 2019 conference at Sycuan on missing and murdered indigenous women and listed descriptions of several Native American individuals locally who have been missing for years.

“California has the largest population of American Indians, and the sixth-highest death rate of indigenous women in urban cities,” said Chairman Smith. “We will continue to advocate for this vulnerable population and fight to bring them the justice they deserve.”