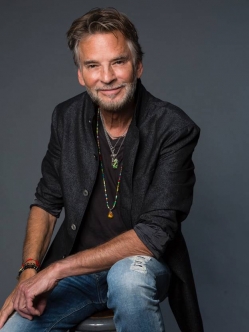 Kenny Loggins' remarkable four-decade-plus career has brought him from the top of the charts to the toast of the Grammys. He's had smash hits on Hollywood's favorite soundtracks, rocked worldwide stages, and found his way into children's hearts while bringing his smooth, beautiful voice to platinum albums of a stunning variety of genres. His gift for crafting deeply emotional music is unparalleled, and it's been a part of his life as long as he can remember.

When Loggins was 7 years old, he watched his two older brothers struggle to write a song, "and I remember thinking, it just can't be that hard," he laughs. Around a year later, inspired by the film Yankee Doodle Dandy, he realized songwriting was his future. "It's a moment that sticks with you," he says, "I knew deep inside that this is something I should do."

Once he started doing it, he never stopped.

Though he's got 12 platinum albums, a pair of Grammys, and hits on almost all the Billboard charts under his belt, Loggins is far from done. Having just released his latest children’s project, the book Footloose (Moondance Press, an imprint of Quarto Publishing Group USA, October 17, 2016), inspired by his 1985 Oscar® nominated and Grammy® Award-winning “Song of the Year,” he's still looking forward to what's next. "I feel very lucky that this is the way I make my living, and not a lot of people can say that," Loggins says. "I've been lucky that I love what I do and I get to keep doing it."