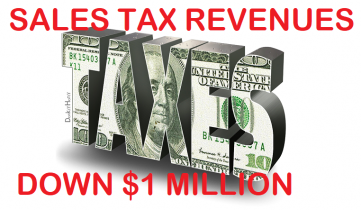 By Mike Allen
June 28, 2020 (Santee) -- The city of Santee will sustain an estimated loss of $1 million in sales taxes in the coming fiscal year starting July 1, as a result of so many stores being closed or only partially open due to the global Covid-19 pandemic.
That sales tax hit is contributing to an annualized rolling deficit ranging from $500,000 to $600,000, and it’s having serious consequences at Santee’s City Hall on Magnolia Avenue.
Finance director Tim McDermott told the City Council this week that the city has already taken the following actions: furloughing or laying off most part-time employees, instituting a hiring freeze, suspending a vacation buy-back program for management, cutting all non-essential purchases as of May 1 for the rest of the fiscal year, and deferring some capital expenditures.
All this was a dramatic shift from the scenario the city was looking at back in February, when McDermott forecast the 2020 fiscal year would end with a $900,000 surplus. Thanks to that forecast, the Council was dreaming of beefing up its Highway 52 improvement fund and making improvements to its key gateway entry points.
“The projections on the impacts from the Covid pandemic are pretty challenging,” McDermott said at the June 24 council meeting.
Even after realizing some $870,000 in savings from all the cuts and reduced spending and moving another $585,000 from other accounts, Santee’s fiscal year 2021 General Fund budget of $46.2 million was still coming up short. So McDermott had to dip into the reserves for $486,000 in order to balance it.

The reserve allocation still keeps the city’s balance above the minimum 20 percent of General Fund expenditures, but McDermott noted that ongoing escalating expenses will keep that deficit growing in future years, threatening the city’s fiscal health.
The two main reasons for the ongoing deficit are the continued increases to the city’s public safety budget and its pension payments.
About $30 million, or nearly two-thirds of the city’s $46 million budget next year, goes to the Sheriff’s Department and the city fire department. The Sheriff’s contract amount increases again by 5 percent in 2021 to $16 million, while the fire department’s budget actually declines slightly to $14 million.
The pension problem is systemic and ongoing, with no relief in sight. For the 2021 fiscal year, Santee will shell out $4.9 million in pension payments, up $539,000 from the current fiscal year.
The budget is getting some relief from the unprecedented $2.2 trillion federal assistance package Congress passed in April in response to the upheaval caused by the pandemic. Santee was allocated $1 million by San Diego County, which obtained a total of $25 million to distribute to 17 cities. The city of San Diego obtained $249 million in a direct disbursement.
The Council spent most of its time on this item talking about the problems associated with businesses reopening and the metrics affecting those decisions.
A slide showing how the city plans to spend the federal funds has the bulk of the funds, $395,000, going to public health and safety resources , followed by business support and economic development at $321,500; communication and implementing health orders $238,000; housing assistance $61,000; and child care and day camps, $20,000.
The motion to adopt the plan passed unanimously with very little comment on the proposed allocations, which has to pass muster with the County.
All the funds must be spent by Sept. 30 or be returned to the U.S. Treasury Department.

I do not feel sorry for the Santee politicos who are ever so PC and brought this upon themselves by allowing the state and county to shut their city down, and destroy lives, commerce, jobs. Santee, you earned this one!
Well, I mean if you were in their position, what would you have done differently?