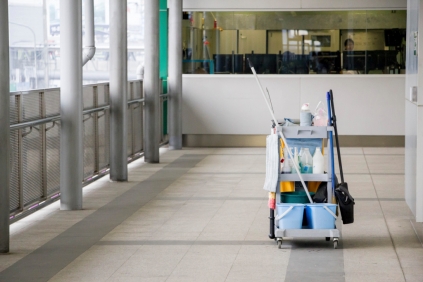 Photo:  Nearly one in three non-citizen working women in California have lost their jobs during the pandemic, according to the study by UC Merced researchers. Photo via iStock.

May 23, 2020 (San Diego) - Early estimates indicate that the coronavirus pandemic has stolen jobs from non-citizen workers — including immigrants who have green cards, work visas or are undocumented — in California at higher rates than citizens. And women have suffered greater job loss than men.

But it’s the Californians at that intersection, women who aren’t citizens, who have experienced the most devastating job losses, according to a study published Wednesday by UC Merced Community and Labor Center researchers.

Between Feb. 15 and April 18, nearly one in three non-citizen working women lost their jobs, the study estimates.

All told, one in four non-citizen workers in California have lost jobs during the pandemic, or an estimated 688,000 workers. The researchers estimate that about 42% of those are undocumented.

While it’s still early days for research about the pandemic’s impact, the UC Merced study provides an early signal of one way that the pandemic has widened California’s economic inequities.

It also comes days after Gov. Gavin Newsom released a grim budget proposal that would slash $14 billion from social services programs to balance a predicted $54 billion deficit, unless the federal government bails-out states.

“To me this whole pandemic is a humanitarian crisis because we have such a lack of a safety net for citizens and there’s virtually no safety net for undocumented folks,” said principal author Edward Orozco Flores, a professor of sociology.

The researchers analyzed the U.S. Census Bureau’s Current Population Survey, which interviews 60,000 families each month. The estimates come with significant caveats: the sample sizes for California are small, making it difficult to draw firm conclusions about subgroups, like women and immigrants.

Flores said, however, that the state’s rates of job loss among non-citizens and women closely mirrored the nationwide patterns, adding weight to the findings in California.

Unlike the Great Recession, which was sometimes nicknamed a “mancession” because it ground to a halt the male-dominated manufacturing and constructing industries, this recession has knocked out the woman-dominated service and hospitality industries, said Jesse Rothstein, professor of public policy at UC Berkeley. For example, 57% of workers in the hotel and lodging industry are women, while 54% are immigrants.

But the damage extends beyond those women to the children and elderly parents that they take care of, Flores said.

“Studies show that women contribute more towards household labor than men do in terms of providing economic and social support for family members,” Flores said. “I can imagine how many children are going hungry.” 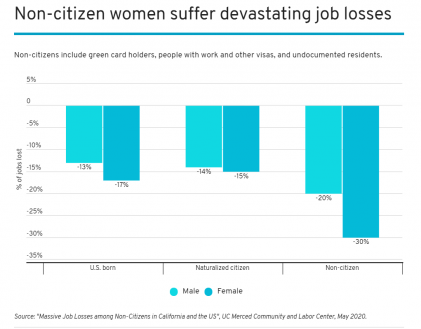 Without a safety net, free fall

Over two million undocumented immigrants live in California, and they comprise about 10% of the workforce. But they don’t qualify for most state and federal relief, like unemployment benefits, CalWORKS grants for low-income families with children, or food stamps.

Families that include undocumented workers who file taxes won’t receive the $1,200 stimulus checks that Congress authorized in its March pandemic relief package, even if some family members, such as children, are citizens.

Those families are also excluded from claiming tax refunds for low-wage workers, though a pending state bill would extend the California Earned Income Tax Credit, which can total thousands of dollars, to undocumented workers who pay taxes. Immigrant advocates face an uphill battle, however, in convincing California’s lawmakers to find the needed $117 million to $167 million as they are forced to make excruciating cuts to safety net programs at a time of unprecedented need.

California has gone farther than many other states to provide relief to undocumented families. The state is offering one-time food stamp benefits worth up to $365 to families whose children qualify for free or reduced-price meals at their schools, regardless of immigration status.

In mid-April, Newsom announced a $75 million state fund to provide 150,000 impacted undocumented workers a one-time $500 payment, for up to $1,000 per household, on a first-come first-serve basis.

“This is a state that steps up always to support those in need regardless of status,” Newsom said. He called the fund “a good start,” though he acknowledged it wasn’t enough.

That became clear on Monday, when the sign-up period for the Disaster Relief Assistance for Immigrants opened. A flood of phone calls crashed the phone lines of nonprofits fielding the applications. The Coalition for Humane Immigrants Rights in Los Angeles said it received more than 1 million calls the first day.

This article is part of The California Divide, a collaboration among newsrooms examining income inequity and economic survival in California.