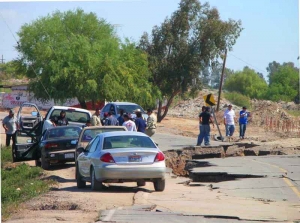 October 17, 2013 (El Cajon) -- With a statewide earthquake drill known as the "Great California Shakeout" planned for 10:17 a.m. on Thursday, Oct. 17, panelists in Grossmont College's Griffin Center told students last week, where to expect earthquakes to repeatedly happen, how to best be prepared for them, and what it is like to experience their devastation.  Many of these tips are included in the story below.

The panel was a precursor to the Oct. 17 drill in which students, faculty and staff will be advised that in the event that they are inside a building during a real earthquake, they should drop to the floor, get under and hold onto a desk or a table, and cover their heads to prevent materials shaken loose from falling on them.  The Oct. 17 drill will last approximately two minutes after which normal classroom activities will resume.

Earth Science Prof. Tim Cliffe, in a multi-media presentation on Oct. 10 , illustrated how earthquakes occur around the rim of the Pacific Basin because this is where tectonic plate boundaries are located.  In contrast, because the margins of the Atlantic Ocean do not correspond to plate boundaries (America’s East Coast is in the middle of a plate, not a boundary)--earthquakes are not as common on the East Coast as they are in California, Oregon, Washington, Alaska, and in other countries bordering the Pacific Ocean, such as Japan, Chile and Mexico.

Cliffe said that in San Diego County there is a system of generally parallel faults that run north and south associated with the boundary between the Pacific and North American Plates.  These include the Rose Canyon Fault right through urban San Diego, which is responsible for producing Mt. Soledad, Pt. Loma and the bay in between. To the west is the San Clemente Island Fault, some 50 miles offshore, while farther East is the Elsinore Fault through Temecula and Julian.  Located farther east is the San Jacinto Fault through Borrego, then the Imperial Fault near El Centro, then finally the San Andreas Fault starting east of the Salton Sea at Bombay Beach.  Across these fault lines have been built Southern California’s major conduits for water, electricity, natural gas and

Interstate traffic, posing the possibility that in the event of a major quake, these life lines could be ruptured, causing California to be cut off temporarily from its usual supplies.

The Earth Sciences Professor said damage from earthquakes is caused by such phenomena as shaking, fault rupturing, mass wasting down steep slopes, liquefaction and possibly tsunamis from distant subduction-related quakes  All have the possibility of causing widespread death and destruction.  He also said that if there is a big earthquake, chances are high that on the same day there will be aftershocks of lesser magnitude.  He cautioned that if the initial quake is a big one, subsequent quakes, although smaller, still will be able to cause extensive damage to weakened structures.

Monica Zech, a well-known former "eye in the sky" traffic reporter who now works as the City of El Cajon's public information officer and safety lecturer, said that one of the worst things people can do during an earthquake is to run.  She told of one recent quake in which two people were killed, one of whom ran outside in a panic and was hit by a car.

"Always be aware of your surroundings," she urged students during the hour-long seminar moderated by Michael Reese, Grossmont College's Dean of Math and Sciences.   "When you walk into any room, know where the exits are and how to get out of there quickly.

"Otherwise, during an earthquake, grab ahold of something, look around you and see what could shake loose and come down on your head."

Zech distributed a Red Cross tip sheet that offered these suggestions for what to do in an earthquake:

For those who are inside a building when shaking starts: 1.  Drop, cover and hold on.  Move as little as possible.  2. If you are in bed, stay there. Curl up and hold on.  Protect your head with a pillow. 3.  Stay away from windows to avoid being injured by shattered glass.  4. Stay indoors until the shaking stops and you are sure it is safe to exit.  If you must leave the building after the shaking stops, use stairs rather than an elevator in case there are aftershocks, power outages or other damage.  5.  Be aware that fire alarms and sprinkler systems frequently go off in buildings during an earthquake, even if there is no fire.

For those outside when the shaking occurs:  1. Find a clear spot and drop to the ground. Stay there until the shaking stops (away from buildings, power lines, trees, streetlights.  2.  If you are in a vehicle, pull over to a clear location and stop. Avoid bridges, overpasses and power lines if possible. Stay inside with your seatbelt fastened until the shaking stops.  Then, drive carefully, avoiding bridges and ramps that may have been damaged.  3. If a power line falls on your vehicle, do not get out. Wait for assistance.  4.  If you are in a mountainous area or near unstable slopes or cliffs, be alert for falling rocks and other debris.  Landslides are often triggered by earthquakes.

She suggested that the students go with pencil and notepad through their homes and write down what is not secure -- "what could fall on your head if something shook your house violently, the file cabinets, pictures ... " -- and then batten down the house and make a plan about what they will do in an emergency.

She suggested that everyone have quick access to "good sturdy shoes and a flashlight," and for people, who take medications, to have at least a week's supply available for quick transportation. She suggested that every San Diegan make arrangements for a place to go in another part of the city or county during an emergency -- whether a friend's or a relative's house--and be willing to make their homes available in case the emergency strikes friends who live elsewhere.

Zech said cabinets that might spill their contents during an earthquake should be locked, and special hooks should be used to prevent pictures from bouncing off walls.

After an earthquake, she said, people should check for damage.  If they smell gas from a ruptured line, they should turn off the gas, but not turn it back on without the help of the utility company.  Otherwise it might explode, she explained.

Reimo Saito, a Japanese student whose grandmother's neighborhood was destroyed by a recent earthquake and tsunami in her country, said luckily her grandmother was able to pack up her things and get to an emergency shelter up the hill.  As it turned out, however, the wave from the tsunami was so high that it tore the roof off the shelter, even while many people were standing on it.  Cars were floating in the town. From fires, embers were falling from the sky, and her grandmother "thought it was like hell, the end of the world."

Although her grandmother had a cell phone, all the lines to emergency services were busy, so it seemed that she and others at the shelter were stranded.  But one man had the foresight to Tweet a message about their dire situation, resulting in helicopters being dispatched to rescue them.

Saito said the situation did not abate after the first wave of the tsunami, although some people mistakenly thought that it would.  Some returned to their homes, and when large after waves struck their neighborhoods again, they were drowned. She said that a ball field where her own relatives regularly played was swept away by the water.

Atsuro Ueno, another Japanese student at Grossmont College, related that he had been away from home when the tsunami hit, and it took him two weeks to finally be able to get back.  A 200-mile drive took 30 hours to compete, because of the damage along the way.  And where he lived, he said, where there once had been rows and rows of buildings, they all had fallen down, and "it was all flat.  It was a very terrible time for me!"

Yuta Takahashi volunteered as a rescue worker after one violent Japanese earthquake.  "Everything was destroyed," he said.  "It looked like war."  He added:  "We cannot stop an earthquake when it happens, but after it happens, we can make things better."