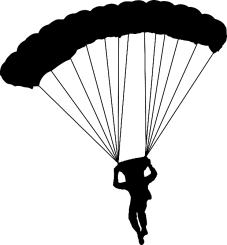 By Miriam Raftery
July 26, 2020 (Jamul) – Joseph James Wingen, 47, of San Diego has been identified as the man who died after skydiving in Jamul on July 19.
According to witnesses, Wingen’s parachute did deploy after he jumped out of the play and he appeared to be in full control of the equipment. However for unknown reasons, he drafted away from the landing zone and stopped steering his parachute.
He came to rest in a ravine and witnesses called 9-1-1.  Paramedics found him unresponsive, removed his parachute equipment and initiated CPR, but he could not be revived.  He was air-lifted to an ambulance at 12686 Otay Lakes Road, where he was pronounced dead.
The cause and manner of his death will be determined in an autopsy, according to the San Diego County Medical Examiner’s office. The Sheriff’s office is investigating the death.

The place is known for fatalities. I don't know  if it is unsafe planes, pilots or equipment. People have landed in the lake and drowned.

This one, I've read elsewhere, was believed to be a medical issue that the parachutist had mid-air, so probably not the fault of the place.

Others may have been related to equipment issues or operator errors.

I didn't know there had been drownings, too.