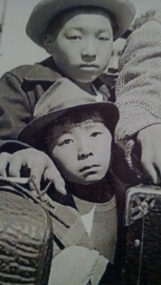 By Chisato Iverson and Miriam Raftery

“I was in first or second grade when all of this happened. I knew that my Japanese friends were gone…We didn’t know where they went,” she recalled.  After  her friends returned, she recalls, “They were very withdrawn and they never talked about it..”

Now she reflects, “Here I am, 75 years later, learning about this whole thing…I think with prejudice and the way we all feel about prejudice now, it’s something that is very upsetting to me personally, that it happened.”   The most important reason for the museum’s exhibit, she believes, is to teach people about the past, in hopes that it will never be repeated. 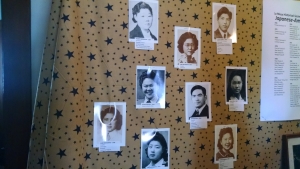 The exhibits are haunting: images of the internment camps, yearbook photos of the students, a  small, battered suitcase—all that each interned person was allowed to bring with them.

The museum’s exhibit was prepared by Grossmont High School AP history students.  Groups of three or four students each chose one Japanese student who was interned. “They did research to find out what happened to them—what their lives were like before, what happened to them when they were taken away from San Diego and moved to Arizona and put away in a concentration camp, and what happened to them after, if they could find out.” The students published a book with their findings, including some first-hand accounts and quotes from relatives of the internment camp survivors. 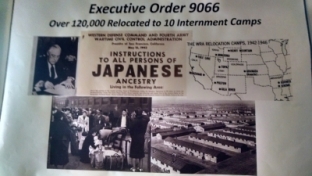 It wasn’t only immigrants who were rounded up; even U.S. citizens and their children were forced into the camps. 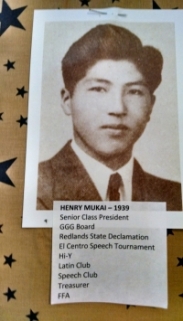 The class project focused on seniors  from the class of 1944.  Nearly all were “very, very active and were leaders at the school,” Neimeier says. Henry Mukai was the senior class president and active in clubs. Another interned student was as quarterback of the school’s football team. Others were active in music and additional sports.

By being deprived of their final year of high school, “they lost a lot, as far as school spirit and involvement,” the historian reflects.

When the internment order was issued by President Franklin Delano Roosevelt, each person was allowed to take just one suitcase.  Everything else was left behind.  One poignant photograph at the museum shows children lining up to board buses. “How do you leave everything you own? And not know what’s going to happen to you?” Neimeier asks.

At first, those interned were taken to racetracks in Los Angeles, until buildings were built and most were transported to Arizona. “There were no trees to start with,” Neimeier explains. “They had cubicles where they put up blankets to separate [spaces], kind of like barracks.”  The camps were surrounded by barbed wire, like concentration camps.

Eventually they were allowed to receive mail, so family or friends could send them items.   There was a school for the children and some activities, as well as sewing machines to make things.  Food was served cafeteria-style.

Some were allowed to leave and take jobs in the Midwest.  The men could join the military and many went to Europe to fight for the U.S., the country that had interned them and their families.

The Japanese-Americans “wanted to prove that they were American, and that’s partly why they fought,” she said of those who went to war. “They did everything they could to prove that athey were not the enemy.”

But some chose not to leave the camps, because they were afraid of anti-Japanese sentiments and did not know how they might be treated by people in the communities they had left.

After the war, some came home to find that they had lost everything, their properties seized by the government, their possessions all gone.  Others were more fortunate, and found that friends or neighbors had taken care of belongings and some retained their properties.  Read our exclusive interview with Grace KaminakaTsuida, a Grossmont High School Japanese-American student who survived interment.

Neimeier  says her cousin told her about a high school principal who had students harvest strawberries at a farm owned by a man who was interned.  “They took care of 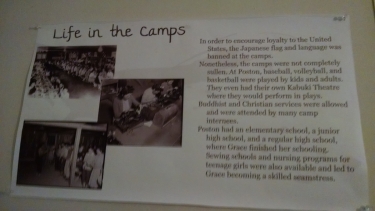 the property, watered the plants, harvested them and sold them, but they got the money. The Japanese-American didn’t,” she says.

When her own Japanese-American childhood friends returned after the internment, she recalls, “they never talked about it..They don’t come to the reunions…I never was aware of it until I started working with Grossmont High School students. I started doing research myself and I realized how extensive it was, as an adult.“

She believes the Japanese-Americans were singled out because of prejudice. “The reason it happened to them, even though some of them had been two generations in the United States, was because of the way they looked. “ The government questioned the Germans and Italians living in the U.S., whose countries we were also at war with, but none of the Germans or Italians were interned.  That was partly because  members of Congress spoke up to protect those of German and Italian heritage, but it was also partly because those ethnicities “looked more Caucasian,” Neimeier believes.

“That type of injustice is very upsetting to me and I think the students felt that way , too. You’ll find out in a lot of the documents they wrote that it upset them , that it happened to them.”  There was no compensation until years later, when Ronald Reagan was president, she noted. 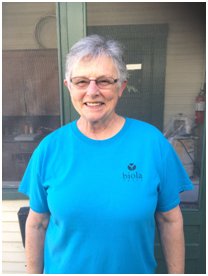 Could it happen again?

“It could happen, with what’s going on now and in our politics,” Neimeier (photo, left) states, noting recent calls by presidential candidate to deport all Muslims and to build walls to keep out Mexicans who were here long before the Europeans came to America.

“I see it happening now and it upsets me. I’ve always had my opinions about politics …but I never felt that it would really affect me…I’m beginning to think if we’re going in the direction that it looks like we may be going, that some things could happen that are going to be very, very negative and very bad.”

Now she hopes the exhibit will help teach others about the past.”I think that’s the only way you’re going to change it, so it’s not going to happen again,” she concludes.  “I’ve been talking to everyone I know about this exhibit and what I’ve learned in the past year…I think it’s important to look at this and say, ‘This is what happened to these people, and it should not have happened.’”

She  hopes to see the exhibit publicized and that newly written history books will include the stories of the loyal Japanese-Americans whose lives were upended by internment.

“I hope that part of our history isn’t being white-washed,  or deleted from our history,” the La Mesa historian concludes.

The exhibit will be on display at the La Mesa Historical Society (8369 University Ave., La Mesa) through at least September.  The museum is open the second and fourth Saturday each month from 1  to 4 p.m.

Our students are afraid because the Government and the press tell them they should be afraid. This is what happens when EVERYONE get's a trophy and no one has learned what it is to loose and then learn how to exceed from the lession of failure. The world has ALWAYS been a scary place. It's just 50 years ago we did not find out about it instantly.