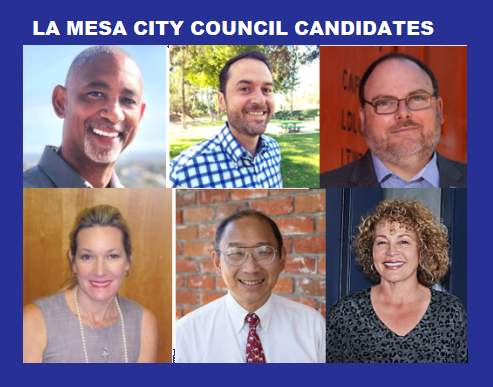 November 3, 2020 (La Mesa) – Councilman Colin Parent and Jack Shu, both endorsed by the Democratic Party, are leading in the La Mesa City Council race with 25.15% and 24.76% respectively in a field of six candidates with two seats up for grabs.  If the current lead holds, incumbent Kristine Alessio may lose her seat.

While some feared an anti-incumbent backlash in the wake of the May 30 riot, that does not appear to have impacted the leaders in this race.  However, both Parent and Shu supported formation of La Mesa’s Citizens Police Oversight Board and a citizens advisory committee on homelessness. Parent appears to have weathered controversy over developer donations over a proposed homeless shelter that was later withdrawn by the county.

Shu told ECM, ""The early results look very good but I'm waiting for more ballots to be counted before presuming anything.  However, there is a clear message that La Mesa is ready for positive change. I'd like to thank the community for the tremendous outpouring of support we've received and my campaign team and volunteers who did a phenomenal job."

Councilmember Kristine Alessio has 22.33% but trails by nearly 1,000 votes with over 60% of votes tallied.  A political independent with a moderate voting record, Alessio voted to delay a decision on the Police Oversight board to allow input form the police officers’ union; she also drew some criticism for her initial support of a civil defense group for La Mesa.

Trailing the frontrunners are Laura Lothian, a realtor endorsed by Republicans with 17.65%, as well as challengers Allan Durden and Mark Papenfuss with 6.75% and 3.36% respectively.