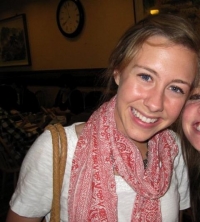 King remains missing, more than 24 hours after she disappeared while jogging around Lake Hodges near the Rancho Bernardo Community Center on West Bernardo Drive, where her locked car was parked. The Poway High School honor student is described as “responsible, conscientious, loving, intelligent, cherished by all who know her,” according to an e-mail sent on behalf of the family today.

Last night, Sheriff’s search and rescue sent over 100 volunteers to search for the 17-year-old long-distance runner, who frequently takes long runs in rural areas. She parked her car after school and never returned.

A straight-A honor student, King is also a peer counselor, Clean Up San Diego volunteer, and a tutor to San Diego youth. In addition, she plays French horn in the San Diego Youth Symphony.

Blond with blue eyes, she is 5 feet 5 inches tall and weighs 115 pounds.

Pomerado News reports that the Laura Recovery Center Foundation is organizing locals who want to help in the search on Saturday. Volunteers must be at least 18 years old, bring a valid ID and dress for the weather, said Fiona Oberrick, a foundation member from Sabre Springs. If you volunteer, wear comfortable shoes and bring water. Volunteers will be sent to assigned areas in groups of 10 to 15 volunteers for two-hour shifts between 1 and 4 p.m., she said.