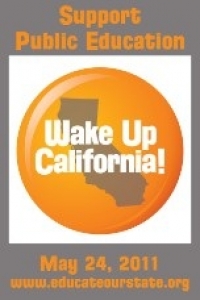 “California public schools are among the lowest funded in the country – it’s time to make education a priority again, not only for our children but for the future of our state,” said Fran Shimp, a parent of two elementary students and a volunteer organizer of the event.  Since 2008-2009, education spending, which represents 40% of the state budget, has incurred 60% of the budget cuts. In 2008-2009, California ranked 44th in per pupil spending (adjusted for cost of living).

In the Grossmont-Cuyamaca College District, 90% of summer school classes were cancelled and more deep cuts will occur this fall if the tax extensions are not approved, warned Chancellor Cindy Miles, who called an all-cuts budget “Educational Armageddon.”

Senator Anderson, speaking at a La Mesa Chamber of Commerce breakfast last week, told East County Magazine he continues to oppose the tax extensions, believing more cuts to the state budget are needed. He proposed a plan to eliminate Cal-Trans and turn over highway construction to local governments and private contractors as one way of saving money.

At the same time as today’s San Diego rally, rallies will be held in Sacramento, Los Angeles, San Francisco, Redwood City, Silicon Valley, and San Jose. Called “Wake Up California,” the coordinated rallies are part a statewide informational campaign by a group called Educate Our State. EOS is a parent-led, nonpartisan group that seeks to unite Californians in support of public education. EOS advocates for an overhaul of the current funding system "so that it is logical, easy to understand, controlled at the local level and simple to administer." For details, visit www.educateourstate.org.

The afternoon rally will include peeches by parents and students, performances by a middle school choir, student dancers, a junior high cheerleading team, as well as a “surprise” flash mob dance by Eveoke Dance Theatre.

For more information, visit www.educateourstate.org, which has materials that parents can download to educate others at their school or in their community, as well as links to contact your state legislators and more.