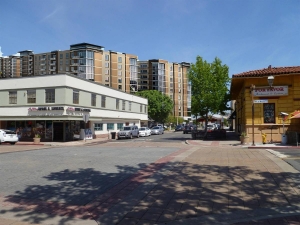 September 29, 2014 (La Mesa) – On October 1st, a revamped version of the Park Station high rise project will be presented at the La Mesa Planning Commission at 6:30 p.m. in City Hall.

How tall would the high-rise buildings be?  Taller than the hills on all sides of it, twice as tall as the tallest buildings in downtown La Mesa and only three feet shorter than Mt. Nebo, according to a Facebook page calling itself “Fight Park Station La Mesa.”  That’s far taller than the four stories currently allowed.

The website proclaims, “Park Station is a cancer that will eat at the heart of La Mesa and we need to stop it!”

But Urban Housing Partners has stated that “New homes, restaurants and retail services should be a win-win for the residents and the city of La Mesa.” 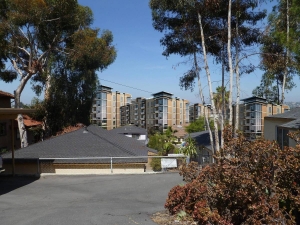 Simulation images show how the buildings would impact views from several locations in La Mesa, including the downtown village, the trolley station, La Mesa Boulevard, Mt. Nebo, the intersection of Baltimore Drive and El Cajon Boulevard, and several residential streets nearby.  A photo from Colina Street shows the close proximity of single-family  homes to the proposed high-rise towers. 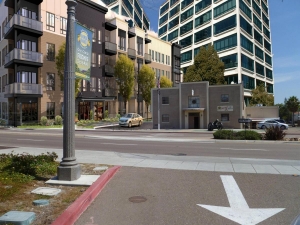 Another image shows the towers dwarfing  the American Legion building.  (photo, below right)The American Legion pulled out as a co-applicant of the project, concluding it is not suitable in scale for the area.  (photo)

Opponents content it would cause congestion and visual blight, lacks adequate parking, and it is out of scale for the historic town that recently celebrated its centennial.

Whatever recommendation the Planning Commission makes will ultimately come before La Mesa's City Council, which has final authority to determine whether La Mesa will retain its historic small town character, or opt for urbanization.