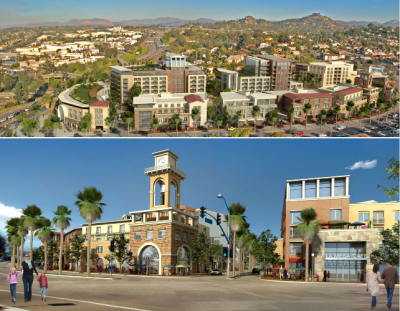 February 2, 2014 (La Mesa) – A Draft Environmental Impact Report for the controversial Park Station at the Crossroads project in La Mesa is now available for public comments and review.

Originally, the developerm Kitzman, had proposed an 18 story highrise. That proposal has been scaled down to lower heights in the EIR, with a low-profile facade but talller buildings stepped up behind.  A tower in one section would soar to 110 feet—or about 11 stories, twice the height of the current 46 foot limit, thus it would require a variance to win approval by the Planning Commission and ultimately, the City Council.

Despite the changes, the City’s analysis concludes that “no feasible mitigation measures exist to reduce potential impacts to scenic vistas.”

Despite the new proposal’s replacement of “unattractive strip retail mall with high quality mixed use design, the project would exceed the mass and scale of the surrounding area and would result in significant impacts to the visual character of the site and community,” the draft EIR further states.

The proposed project, touted as a mixed-use urban village on 5.23 acres at the southeast corner of Baltimore Drive and El Cajon Boulevard, could include 416 residential units, 61,000 square feet  of retai, 146,000 square feet of commercial office space and/or a a 500 room hotel.  It would include just one parking space per residential unit due to proximity to mass transit.

Air quality would also be negatively during construction and could not be mitigated.  Increased traffic is also a concern, although the dense development is touted by supporters as transit-friendly since it would be located along trolley and bus lines.

Three other alternatives are also proposed.

An Office Mixed Use Alternative would eliminate the hotel and limit building height to four stories. This version includes 416 residential units, 146,000 square feet of office development, and 28,000 square feet of specialty retail.

A Linear Park Alternative would add a 1.09 acre linear park on Nebo Drive, increasing the project’s total acreage and raise the number of dwelling units to 500 and residents to 1,145.  The hotel, office and retail footprint would also be enlarged.

Even scaled down, the project would still be among the largest developments to be built in La Mesa since Grossmont Center and would be the second tallest structure in town after Grossmont Hospital.

Early public reactions to the proposal were frosty, based on comments made at public hearings held over the last two years, though the project would be built on a blighted properly formerly occupied by a car dealership.

The project, if approved, would boost tax revenues for the region, but would also irreversibly alter the community character, looming over the historic downtown Village district.  But backers contend that higher density development in urban areas is more desirable than sprawl in the backcountry, where water is scarce and fire danger increased with more housing in the urban-wildland interface.

The public can submit comments on the drat EIR from now through March 17. Comments should be submitted to Bill Chopyk, Director of Community Development, 8130 Allison Avenue, La Mesa, CA 91942. The Draft EIR can be reviewed at the La Mesa Library as well as online via the link at the top of this article.

We've created a Facebook page dedicated to stopping this massive overdependent and keeping the zoning to what it is now - four stories. Please join the page and help keep the character of La Mesa. https://www.facebook.com/parkstationlamesanomorethanfour
What possible justification could be offered for the variance, aside from the developer's and city's mutual interest in making money?--which, of course, doesn't count. There is none.