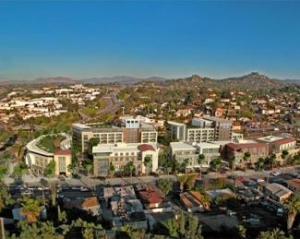 May 14, 2015 (La Mesa) -- Park Station is coming before the La Mesa Planning Commission for the third time since the application was first submitted in 2008. The hearing will be held on May 20 at 7:00 p.m. in City Council Chambers. The first time it was kicked to the curb on the basis of height and density. The second time everyone -including the applicant- was stunned when the American Legion Hall withdrew their co-application during the hearing, requiring the Kitzman’s to come up with a new plan.

The staff report sums up the differences between current zoning, the 2014 proposal and the current one in the chart below. While not taking any specific position in its recommendations, the conclusion of the report draws attention to primary areas of concern for the Commission to examine:

The primary concerns to be considered by the Planning Commission focus on applicant’s request for a “by-right approval” of increased density, increased building height, a hotel/motel, and reduced parking without the normal opportunity for community input and approval of the specific type of buildings and development that will be proposed in the future. Approval of the Park Station Specific Plan would waive the City’s authority to review a Special Permit for increased building height and preempt the City’s ability to place appropriate conditions on a CUP for a future hotel/motel use. 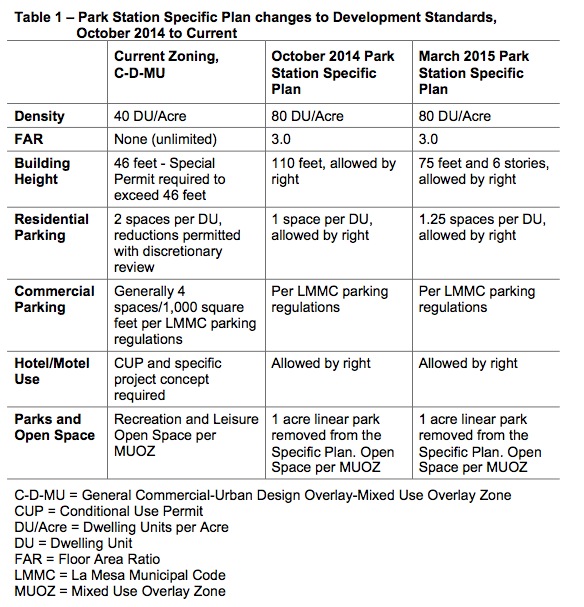 Written comments from the public can be delivered to City Hall, or e-mailed to bchopyk@ci.la-mesa.ca.us.

The full current documentation can be found at:

For earlier articles about this project, see: