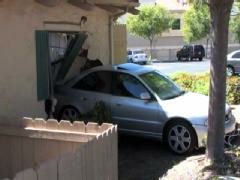 June 27, 2012 (La Mesa) – La Mesa Police responded to a vehicle crash yesterday afternoon in the 4900 block of Mills Street, where they discovered that a motorist had parked a vehicle on the street and failed to apply the parking break or put the vehicle in park. After the driver left the area, the vehicle began rolling backwards and across to the west side of the street colliding into an elder care home.
The vehicle traveled a distance of approximately 260 feet prior to the collision. An 89 year old resident of the facility was sitting in his chair when the vehicle crashed through the wall, knocking him to the ground.
The 89-year-old victim was transported to Sharp Memorial Hospital where medical evaluation revealed that he had suffered a closed head injury. The victim later succumbed to his injuries. Further investigation is being conducted into the incident and is ongoing at this time.