By Rebecca  Jefferis-Williamson and Miriam Raftery

September 28, 2016 (El Cajon) – Parkway Plaza regional shopping center is shut down for tonight after protests spilled into the mall over yesterday’s fatal police shooting of Alfred  Olango, 38, an unarmed African-American man with mental health issues.  Marketing director Ken Gray told  ECM the mall shut down for the night on advice of police.

“ Where I work, a lot of people were crying and screaming,” Gage Miller told  East County Magazine shortly after police evacuated the Walmart store where he works and escorted everyone outside. He said around 3 p.m., “lots of people were marching in the mall and going into the movie theatre…Walmart had to put its gates down. Protesters were spraying water from water bottles all around.” 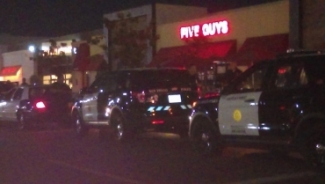 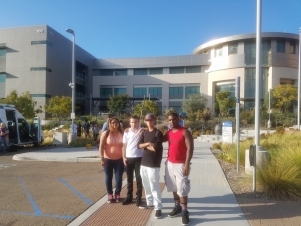 Despite the chaos and not knowing if he will be paid for his shift, Miller said, “Our First Amendment right is to protest. As long as it’s non-violent, I believe they, the protesters, did  the right thing.” (photo, right:  Miller and friends outside El Cajon Police Station later.)

A young man who was inside the movie theatre watching “Blair Witch” told ECM he was alarmed when told to evacuate,  hearing sirens and glass breaking.  He indicated jewelry stores were hastily covering display cases as officers led everyone outside.

Nearby, a man taunting protesters with racial slurs and wearing a red hat with the Trump slogan "Make America Great Again" was chased by protesters through the Broadway Village shopping center parking lot.  It is unknown if he was injured, but he did manage to make it to police officers and avoid further confrontation.

ECM reporter Rebecca Williamson was filming the event when she was knocked down and had her camera bag stolen.  ECM news partner 10 News has the video here.

A heavy police protest was also present at Interstate 8 off-ramps that protesters sought to shut down.

An employee at Downtown Café restaurant told ECM that the car show in downtown El Cajon has been cancelled tonight,  though the restaurant  remains open. 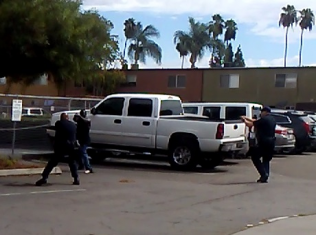 olice officers responded to a call reporting Olango,  who has a history of mental illness, was acting erratically.  According to police,  he refused to obey instructions and pulled something out of his pocket, then assumed a shooter’s stance.  A photo released by police supports that claim.  But some witnesses have offered conflicting accounts and want video released taken by a bystander’s cellphone that police say they took with permission.

Civil rights leaders have called for a Justice Dept. investigation. Questions are being asked including why police chose lethal force and why a mental health professional was not sent out with officers given  Olango’s history of mental issues.

ECM has received a tip,that Rev.Al Sharpton with the National Action Network is coming to San Diego with “busloads” of people.  Rev.Shane Harris, head of NAN in San Diego, spoke out at a rally in El Cajon this morning to call for an independent investigation and other action;  Harris also hosted the brother of Olango,  a Ugandan refugee, on his national radio show today.

Two vigils are planned this evening, one at the site of the shooting in the 800 block of Broadway, the other at  El Cajon Police headquarters,  according to  press releases and social media postings, as tensions mount across the community.