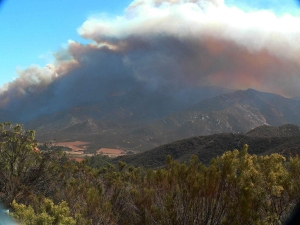 California law now requires notification of community members when a paroled sex offender moves into the area, as recently occurred in Boulevard. Tisdale believes the same should be required if an arsonist comes to town.

“The extent of damage can be a lot worse from an arsonist,” she observed.

Tisdale testified at yesterday’s Joint Legislative committee on Emergency Management in San Diego. She expressed concerns over fire protection and multiple major infrastructure projects that could increase fire risks to her community (including Sunrise Powerlink and major wind turbine projects). Then Tisdale revealed, “We just learned that a paroled arsonist was in our community. “ She asked Senator Kehoe (D-San Diego), chair of the committee, to consider legislation requiring notification of community members about paroled arsonists, just as the law currently requires for “sexually violent predators.”

“There were some suspicious fires we had in the area—Live Oaks Springs and Boulevard,” Mark Ostrander, CAL FIRE Battalion Chief from Campo, confirmed in a phone interview with East County Magazine. He was not aware of the specific parole violations that landed the arsonist back in custody.

Investigations continue into the causes of the fires. Chief Francois, who is off duty for three days, could not be reached for comments.