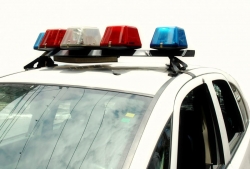 July 21, 2011 (Rancho San Diego) – San Diego Sheriff’s officers launched a foot chase against a suspected parolee, possibly armed with a gun, near Jamacha Road and Calle Albara in the Cottonwood area of Rancho San Diego shortly before 7 p.m. this evening.

The suspect is described as a Hispanic male adult, age 30, six feet tall, 200 pounds, with dark hair. When last seen he was wearing a yellow shirt, white hat, and sunglasses.

A perimeter was set up and a helicopter unit called in, however the suspect ultimately evaded authorities and the search was called off, Sergeant Munson informed ECM at 8:15 p.m.