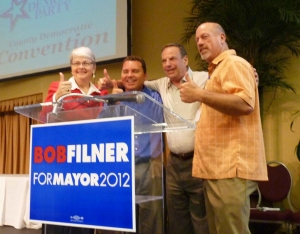 September 22, 2011 (San Diego) – A sold-out crowd turned out for the San Diego County Democratic Convention at the Jacob Center on Saturday.  Democrats now have a majority  party registration both in the city and county, party chairman Jess Durfee told an enthusiastic crowd.

State and local party leaders emphasized that the stakes in this year’s elections are high, with funding for Social Security, Medicare, public education and more on the line. The national election will be all about “Republicans dismantling government,” Betty Yee, state board of equalization member, told the crowd, adding, “Americans have suffered enough.”

Yee criticized Republicns for extending benefits such as tax breaks to a “privileged few” while 6 million Californians are living below the poverty level, including 2.1 million children. With Republicans determined to stem budget gaps by slashing spending, not closing tax loopholes even on the wealthiest Americans amid a recession that has left many Americans suffering, Yee observed, “Millions are going hungry every day. That’s who we are fighting for.” 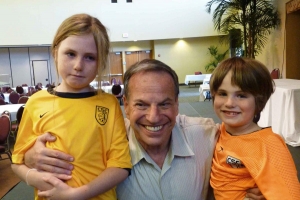 For local Democrats, the biggest prize in 2012 could be electing a Democratic mayor of San Diego.

“For the first time in twenty years we have a strong candidate for mayor,” said Durfee, who urged the party faithful to support Congressman Bob Filner’s candidacy for mayor.

San Diego Unified School Board chairman Richard Barrera introduced Filner, whose long record of public service includes heading up the same school board as well as serving on the City Council, teaching at San Diego State University, and standing up for civil rights as a Freedom Rider during the 1960s. “We need a freedom rider for mayor,” Barrera said. In an upbeat speech, Filner laid out his plans for bringing thousands of new, good-paying jobs to the region and revitalizing San Diego. (See ECM story and video on Filner speech: http://www.eastcountymagazine.org/node/7320 ) 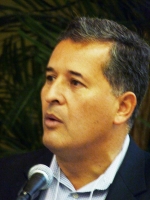 Another battle is brewing for the seat being vacated by Bob Filner, a district that now spans from the ocean to Imperial County, encompassing the southeast portions of East County. Calling Wal-Mart a “predator” that takes jobs, State Senator Juan Vargas pledged to support workers and make jobs a priority if elected. Denise Ducheny, a veteran state Senator who has chaired budget committees in the Legislature and formerly represented East County, formally tossed her hat in the ring to also vie for the open Congressional seat. 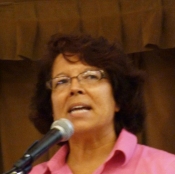 Redistricting added an air of excitement as several candidates announced plans to run for open seats or challenge incumbents in drastically redrawn districts. Lori Saldaña, leaving the Assembly due to term limits, announced she will challenge Republican Brian Bilbray in a redrawn Congressional district that is now considered competitive. “I will never vote against Social Security of Medicare,” she vowed, “and I will never vote against workers’ rights.”

Kevin Beisner, San Diego Unified School Board member, said progressive Democrats on the board made it possible for the District to become the number one district in America for producing solar power. With the money saved on energy bills, he revealed, the district has been able to restore all music teacher positions and keep K-3 grade classroom sizes small.

Councilman Todd Gloria rattled off his list of why having Democrats in office makes a difference. “When the Mayor said close libraries, we said no. When we were browning out fire engines, Marti Emerald said enough is enough, no more. Funding mass transit? Sherri Leitner made it happen.” 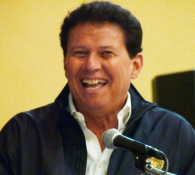 Assemblyman Marty Block confirmed he is running for the State Senate seat being vacated due to term limits by Christine Kehoe. “We have a lot of diversity. We are the party of the people,” said Block, who has championed education causes as chairman of the Higher Education Committee in the Assembly. 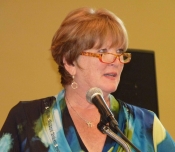 Councilwoman Marti Emerald, who recently moved, now finds herself running in a new district due to reapportionment.  The former consumer affairs journalist observed that Democrats believe in funding social services to help people in need-- not special interests.

California Insurance Commissioner Dave Jones spoke of the battle he’s waged to protect consumers from insurance company abuses. He’s pushed for passage of AB 52 that would allow his office to reject excessive rate hikes. Without authority to reject the rate hike, he none-the-less persuaded insurers to drop rate hikes totaling $86 million, saving money for consumers and small businesses. “The five largest healthcare companies in 2010 made 50% profits,” he said, adding that he got Blue Shield and Blue Cross to drop rates. 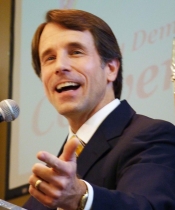 Jones has also worked to implement elements of federal healthcare reform. While the bill was not perfect, he believes many Californians aren't aware of major benefits it has created, such as cutting down the the “donut” hole in Medicare prescription drug costs, eliminating insurers ability to deny healthcare to seriously ill children, preventing insurers from canceling policies after a person becomes ill and for eliminating lifetime caps on benefits. “I met a young man with a fatal blood disease,” he said of an individual who was close to reaching an insurance company’s lifetime cap . “Thanks to the Affordable Care Act, that man will stay alive.”

He also addressed needs of homeowners and fire victims. “Here is San Diego, the huge challenge you face is wildfires,” Jones said. “It’s important not to be victimized twice, once by wildfire and once by insurance companies.” He’s implemented new rules to require insurers to inform homeowners of actual replacement costs, a move that led one insurer to sue him for “infringing” First Amendment rights. “I am a decent enough lawyer to know you don’t have a commercial contract right to mislead people,” he said with a smile. 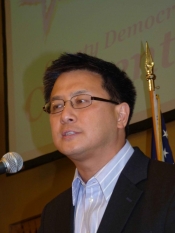 State Controller John Chiang observed that the state’s finances are “broken. We must restore the dream.” He spoke of the challenge he faced when the state had only $2.7 billion in its coffers, yet he had $10 billion in bills to pay. “I have to make sure California doesn’t go insolvent…schools and healthcare would collapse,” said Chiang, who has worked to protect the most vulnerable but faces an increasingly difficult battle.

Meanwhile, the Legislature remains locked in a partisan divide, like Congress, with Democrats seeking revenue increases while Republicans oppose them, calling for even deeper cuts in social programs and education instead.

The GOP insists that both state and federal government must live within their means without raising revenues and that even bigger tax cuts for wealthy “job creators” and corporations are needed to stimulate the economy, while Democrats support jobs creation measures to put people to work, along with tax increases on the wealthy and major corporations, to revitalize the economy while protecting those most vulnerable.

Which argument will voters embrace? Stay tuned for the 2012 elections to find out.

Hey that is awesome information that you have given and I have to appreciate your efforts.NEMA 4X

These people are doing an awesome job for San Diego County as the workers and the middle class will really benefit from it and they are happy about it.k-log furniture

People should always come forward to do the right thing and I guess very few are left. So supporting or should I say for fighting for workers and everybody is speaking for it and that's a good thing. So keep it up. fulfillment services

The party leaders vowed to reduce the struggle of the middle class.Now hoping that they do as they have promised. infographic

" ..all about “Republicans dismantling government,”. You better believe it and, the sooner the better!