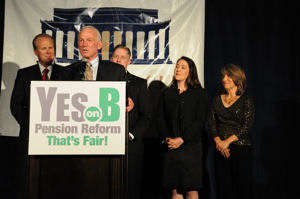 Unions head to court over Prop B Pension cuts
By Nadin Abbott
Photographs Tom Abbott and Nadin Abbott
June 15, 2012 (San Diego)—Approval by voters of Proposition B, which eliminates guaranteed pensions for many city employees, has drawn praise from conservatives and sharp criticism from labor. So has Prop A, which eliminates Project Labor Agreements for construction projects on city property.
But now labor groups are fighting back, filing lawsuits to protect pension rights for city workers.
In a phone interview with Roland Arrolado of the San Diego Firefighters IAFF Local 145, ECM learned that the department is already in court due to an alleged violation of the Meyers Brown Act by language in Prop B. Any changes in the pension system require meetings between the mayor and employees; Arrolado says meetings did not occur.  http://www.perb.ca.gov/laws/statutes.asp
So what will be the net effect of this proposition on the firefighters?
In the private sector, most employees count on both a Social Security benefit and a 401K for retirement. The Social Security system provides a safety net, allowing people to retire with some security.
City employees, including the fire department, have not been part of the Social Security System for over a generation. Since city employees do not have Social Security, “without security they will not retire.” In effect we may see sixty and seventy year old fire fighters responding to calls. This will increase cost due to medical issues while on the job, the union contends.
Firefighters already pay 16% of their pay into the retirement system as a defined contribution.
Regardless, the firefighters are willing to work with the city to meet the requirements of Prop B and move from the current system to what the Proposition mandates.
Arrolado does not expect to see a recruitment problem for the Fire Department. But keeping highly trained employees is an issue. “Retention of high quality firefighters will be the problem, as they will move to other places with better retirement and pay,” Arrolado predicted. Already, San Diego Fire is the lowest paid urban fire department in the state, he said. Firefighters won’t have to go far to improve their compensation; some East County communities such as Santee and El Cajon have better pay and benefits. 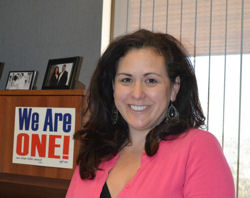 According to Lorena Gonzales, Secretary Treasurer of the San Diego and Imperial County Labor Council, now there will be negotiations to try to get some kind of a safety net for new hires. Moreover, AB 1248, sponsored by Assembly Member Ben Hueso (D-79), if it becomes law, will help by forcing cities like San Diego to provide Social Security to workers.
Moreover, there are lawsuits right now, and perhaps the state Judiciary will intervene. Council dealt with this in closed session Monday regarding implications of lawsuits.
http://www.sddt.com/Government/article.cfm?SourceCode=20120608czh&_t=Implementation+of+Prop+B+on+councils+agenda
Local labor officials have been in contact with the San Jose Labor Council, since there was a similar Proposition on the San Jose ballot. The issues are different enough where there cannot be coordination. Gonzalez also expects that police officers will be next in the target list for pension changes. 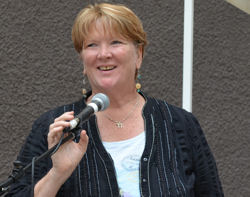 In a talk last weekend with Councilmember Marti Emerald (district 7), she told me that the "Public Employees Retirement Board brought the initial action to bring an injunction" before the election on Tuesday, but the judge told them to come back if it passed. The City Attorney is trying to speed the process to implement by going to the Court of Appeals as well.
Several unions are filing lawsuits, Emerald confirmed, adding her view that the measure will not save money. Moreover she suggested that the pay freeze will result in the city losing more valuable employees to other municipalities and the private sector.
Emerald also said that any employee whose pension will disappear will file lawsuit. The city is breaking its promise that while nobody gets rich in the public sector, the city "will do due diligence to get you a secure pension," she observed.
She added that Councilmember DeMaio (District 5) voted against current implemented reforms, which already have saved the city billions of dollars.
While opponents decried passage of Prop B, proponents celebrated their victory on June 5 at the U.S. Grant Hotel.
Proposition B passed by 66%. T. J Zane, President of the conservative Lincoln Club, called the measure “the road to take back our cities and our states.” Zane said Prop B would serve as a model for other cities across California, and probably across the nation.
Mayor Sanders told the crowd of supporters in the Republican Party that this was a “long road in the reform effort.” He congratulated those work worked to get the measure passed, adding that  people now understood that it was not fair that one class of employees would get benefits over others. He emphasized that this was a citizens’ initiative and said the citizens spoke with a loud voice in favor of pension return.
Lani Lutar, President of the San Diego County Taxpayer’s Association also said that this was a boom for the city and county of San Diego.
The mood among the crowd was exited, as they felt they took another step into what they call a critical reform effort in the city of San Diego.
As for Prop A, it has been touted by conservative leaders including mayoral candidate Carl DeMaio as a means of saving the city money on construction costs.
But Gonzalez disputes that assertion. With the end of Project Labor Agreements, by statute the city is projected to lose billions of dollars in state funding. Gonzalez predicts that Prop A will end up being repealed once citizens in the city realize how much money the city will lose in State funds.