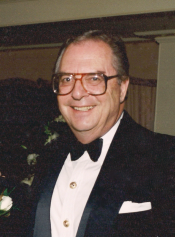 February 27, 2011 (San Diego)--S. Myron “Mike” Klarfeld, 83, died February 23 in the arms of his wife, Councilmember Marti Emerald, after a long struggle with Alhzeimer’s disease. An attorney for 54 years, first in Massachusetts and later California, he is remembered as a champion of justice.

His longtime colleague in the law, famed attorney F. Lee Bailey, once wrote that Mike Klarfeld was a “barrister extraordinaire, who is damned near as nuts as I am.”

He was a lifelong pilot, crisscrossing America in his personal airplanes. He also travelled the back roads of America on his Harley Davidson, even winning Best of Show with his “Dragon” at the famed Sturgis Harley Rally. “Mike never did anything half way,” a press release issued by Emerald stated.

Emerald met Klarfeld when she was a consumer affairs TV reporter assigned to interview him about lawsuits he filed against retailers and won, ultimately leading to a change in California law to eliminate expiration dates on gift certificates. She later interviewed him again for a story involving odometer rollbacks.  Klarfeld married Emerald in 2001.

A graduate of Suffolk University and the University of Miami, Klarfeld practiced real estate, business, and aviation law.

In addition to Councilmember Emerald, Klarfeld is survived by his brother Marshall, daughters Susan, Nancy, Laura, and Chloe, and four grandchildren.

Services will be held on Tuesday, March 1st at Noon in the Balboa Park Club. A reception will follow the service. In lieu of flowers, donations to San Diego Hospice are suggested. www.sandiegohospice.org.