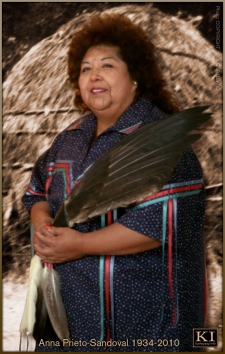 “Our people need to understand the importance of honoring our ancestors and our traditions and to never forget the hardship and depravation our people went through to get where we are today.” –Anna Prieto Sandoval

November 7, 2010 (El Cajon)—Anna Prieto Sandoval, 76, former chairman of the Sycuan band of the Kumeyaay Nation, died October 28 at her home on the Sycuan reservation from complications of diabetes. She served as Sycuan’s elected chairman from 1972 to 1990 and was a leading voice in bringing Indian gaming to the reservation, helping to create one of the most successful Indian gaming establishments in the nation. Also a historian who advocated for preservation of native traditions, she was inducted into the San Diego Women’s Hall of Fame in March 2010.

“Anna Sandoval has been a mentor, matriarch, and inspiration to many women both in her native community and throughout San Diego County,” the San Diego Women’s History Museum induction entry on Sandoval states. The first woman leader of her tribe, Sandoval led efforts to bring a bingo hall and later, a casino to Sycuan. “Anna was able to bring jobs, health care, housing, and a new way of life for her people and her community,” the Women’s History Museum entry notes. “She sought to provide health benefits to all native peoples, but even more importantly, to assist her larger community in becoming self sufficient.”

In a 1991 article, the Los Angeles Times described Sandoval’s rise to power from impoverishment. The story recalled the low point in her life, when as a welfare mother she once trudged 10 miles to El Cajon looking for milk for her five children. “Passing the wooden shacks with outhouses on the rocky hillsides of her reservation, she prayed for deliverance of her people,” the article stated.

Born May 14, 1934 on the Sycuan reservation, Sandoval was the fifth generation n her family to live on the reservation. She attended Dehesa Elementary and Grossmont High Schools. Married in 1953, she later divorced. She is survived by three sons, Joseph, Raymond and Orland; a brother, George Prieto; 15 grandchildren and five great-grandchildren. She was predeceased by two daughters, Cheryl Haywood and Marquette Riberas.

Sycuan chairman Daniel Tucker remembers Sandoval as his mentor who fought for tribal sovereignity as well as Indian gaming. “She taught me to be diligent and a hard worker and she was fair,” Tucker said, according to a San Diego Union-Tribune obituary on Sandoval, reprinted at Kumeyaay.info with many additional photos of Sandoval. “I’m where I am today because of her.”

Viejas former chairman Anthony Pico called Sandoval “a very bold person but also very sensitive,” the Union-Tribune reported. He praised her vision in leading Sycuan to be the first local tribe to establish gaming, an example followed by other tribes. “Because of her, we enjoy a better life.”

“Anna was revered by us all,” Karen Vigneault, library for the Santa Ysabel tribe, posted on a local message board. “I personally remember Anna for all the good she has done for our people and villages on both sides of the border.”

When Sandoval was growing up on the reservation, many homes lacked indoor plumbing and the average adult had only a sixth grade education, the L.A. Times reported. The only community structures were a century-old Catholic church, reflecting the mission era, and a cinder-block meeting hall.

When Pan American International proposed a bingo hall in 1983, some tribal members objected, worried about traffic and strangers on their lands. So Sandoval said, “We can put it on my land,” the L.A. Times reported. The bingo hall was built on a corner of the reservation that fell 91% on Sandoval’s property. In the early days, Sandoval rolled tortillas in her kitchen and sold them to bingo players.

The bingo hall initially produced only meager payments for tribal members, although the tribe was supposed to get 55% of the net. Sandoval weathered criticism in those early years of tribal gaming. Then in 1987, Sycuan booted Pan Am off the reservation, finding it in violation of a tribal licensing ordinance. The tribe won a court case and the next month had about $300,000 to distribute to tribal members.

The tribe soon expanded to add more gaming —and Sandoval insisted that the Indians cont the chips themselves. In 1990, the bingo palace was replaced by an elaborate casino. Money from the casino was used to build a health clinic, church, fire, and homes for tribal families. In 2000, Sycuan signed a tribal gaming compact with the state of California. Sycuan gaming revenues have been used to benefit not only Sycuan tribal members, but the broader community in East County. The tribe has donated money to area schools and many local charities. Gaming profits later enabled the tribe to invest in purchase of the Singing Hills golf course and hotel, now called the Sycuan Resort.

Despite the prosperity that gaming brought to the Sycuan people, Sandoval saw the new-found wealth as a double-edged sword. She reflected in a 1994 Union-Tribune interview on the pre-gaming era. “Those times were giving, taking and sharing, which we don’t have today,” she mused, noting that youth on the reservation today have not experienced hardships, many growing up with new homes and cars. “I guess it’s good in a way, but when you lose your traditions, you don’t know who you are,” she reflected. 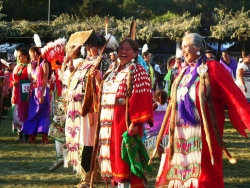 English was Sandoval’s second language. As a tribal elder she became a champion for preserving the Kumeyaay language and supported founding a class in 2005 to teach younger generations their native language.  She had traditional Kumeyaay lines tattooed on her face and encouraged tribal members to follow cultural traditions.   Sycuan held its first pow-wow in 1990 under her leadership; the pow-wow has since grown to be one of the largest held in California, attracting traditional tribal dancers, drummers and birdsingers from throughout North America.

“She stayed grounded in her culture and native history, focused on creating awareness and instilling values of life in all Kumeyaay,” the Women’s History Museum entry concluded.

A traditional Kumeyaay clothes burning was held October 31st. An all-night wake was held on November 5, followed by a mass at Blessed Tekakwitha, burial at the Sycuan cemetery and a gathering at Sycuan Recreation Center the next morning to honor and remember Sandoval’s legacy.