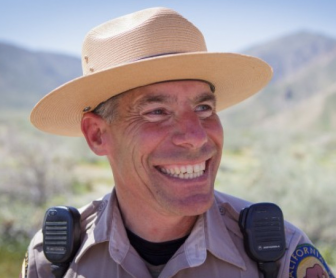 The California State Park Service praised the 15-year-veteran ranger as “one of the finest ambassadors of Anza-Borrego Desert State Park and our Department,” adding that Bier was “well known and respected throughout the Borrego Springs community” including community events and school programs.  He also coordinated the annual count of Desert Bighorn Sheep.

Norb Rhumke, Acting District Superintendent with the State Parks Colorado Desert District, authored the Park Service statement.  He said, “We grieve at the passing of a tremendous individual, but also for the loss his family suffers.” He voiced confidence that Bier is now `Playing ranger in a better place.’”

Bier is survived by his wife, Heidi, and 11-year-old son, Lorne.  A Go Fund Me page has been set up help his family with final expenses. Memorial services are pending.

Detectives are investigating the shooting and details have not been released, according to the Borrego Sun. The San Diego Sheriff’s Department told ECM that the Park Service is the lead investigating agency.

Diana Lindsay, past president of the Anza Borrego Foundation, author and long-time park volunteer, recalled Bier as a “much-loved ranger” in an email to ECM.  He was slated to lead a hike on behalf of the ABF on April 1st for the organization’s 50th anniversary, the day his death was reported.

Ernie Cowan, outdoor columnist for the San Diego Union-Tribune, wrote on the Go Fund Me page, “I shared many beautiful days in the desert with Steve. This is a profound loss of a man who was larger than life.”

Bier worked with cadets and other interpretive training programs, instilling wisdom and a passion for educating the public about our parks and all that is precious within.  A consummate photographer, he has provided thousands of depictions of the desert he loved.

During the recent super-bloom following the winter rains, Ranger Bier led media on tours, explaining that some seeds had been underground for decades or more and had not seen water in 10 to 20 years before bursting forth in a blanket of flowers.

In one of his final interviews in March, Bier admired the fragile beauty of these ephemeral survivors, telling National Public Radio, “You have to be tough to be out in the desert. That's for sure.” Then he concluded, “What you're looking at today could be gone tomorrow.”

smart and helpful, with a wonderful sense of humor.