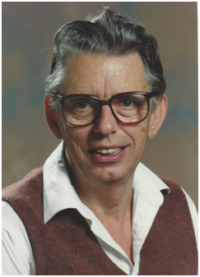 November 1, 2014 (La Mesa) – Aubrey “Bud” Dunne, 82, passed away on October 28, 2014 at his home in La Mesa.  Past president of the La Mesa/Spring Valley Teachers Association, he taught math at La Mesa and Parkway Middle Schools.

He also played a major role in the Associated Community Theatres (ACT) of San Diego County, which named the Aubrey Awards in his honor.  During the 1960s on Lincoln’s birthday, you could find him dressed up as Lincoln delivering the Gettysburg address at Grossmont Center. A lifelong stamp collector, he also founded the International Society of Worldwide Stamp Collectors.

Born July 24, 1932 in Sayre, Pennsylvania, he was the son of Erba Lucille Birney and Aubrey Clarence Birch and raised by his stepfather, Eddie Dunne.  He served for two years in the U.S. Army, graduating from Mansfield State Teachers College in Pennsylvania before moving to California to become a math teacher.  “His math students over the years will attest to you that he was a wild and crazy guy and some of his students have become lifelong friends,” his son, Gregg Dunne, said. “He was loved and will be missed by all of his family and friends.”

A loving husband, brother and father, Aubrey is survived by his wife Valerie; his sister Jane and brother Alex; his children: Greg, Grant, Guy, Shannon, Desiree, and his eight grandchildren.   Supportive and proud of his children, he held traditional views and believed strongly in the Bible.

He was a genius, according to his membership in Mensa.  Roller skating, ping-pong, board games, and cooking were among his many and varied interests and hobbies.

According to his family, he loved to sit down to the piano and play his favorite tunes.  He was passionate about everything from gardening and birds, to karaoke and dancing. Always positive and upbeat in nature, he loved life and made the most of every day.  He was great to be around and it was always stimulating and entertaining to be in his presence. He was a free sprit with a steel-trap mind.

His viewing will be held form 4-8 p.m. on Thursday, November 6th, at Dignity Memorial located at 684 S. Mollison in El Cajon.