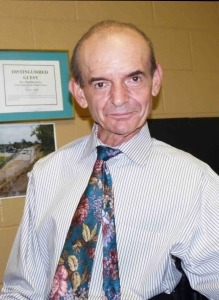 Bodry founded the Challenge Center in 1987 after suffering a spinal cord injury from botched surgery that left him paralyzed at age 27, with no adequate facility for long-term rehabilitation.  The center has had amazing results helping patients with severe brain and spinal cord injuries, as ECM reported back in 2008, enabling many severely disabled patients to walk, talk and achieve independence.  In his interview, Bodry shared his dream:  for the program he founded at Challenge Center to someday become a national model replicated nationwide.

On its website, Challenge Center remembers Bodry as “a great man, who accomplished so much in his life despite many challenges that would have stopped a lesser man in their tracks. He was admired by all for his charisma, drive, and ability to bring people together. Bill started Challenge Center 30 years ago with little more than a great idea and an amazing ability to engage others in his vision. There are innumerous people in San Diego and beyond that owe Bill a great debt of gratitude for the many blessing he and his Challenge Center brought into their lives.”

Bodry retired in 2012, but his legacy lives on at the Challenge Center, reflecting his belief that all things are possible, with strength and determination, and the will to believe in the treasured gift of each day and the healing power of the human body and spirit.  During his years as President and Executive Director, he received many community awards, including the Channel 10 Leadership Award, and recognition by leaders and celebrities near and far.

Despite his disability and medical struggles spanning three decades, Bodry had a love of life and remained active. His passions included sculpting, travel, wheelchair dancing and music he played on keyboard, guitar and harmonica.

He is survived by his sisters, Mary Skwarek and Nancy Nurenberger, as well as seven nieces and nephews and their children, all living out of state.

Read more about his remarkable life and accomplishments at  http://www.challengecenter.org/staff/bill-bodry.