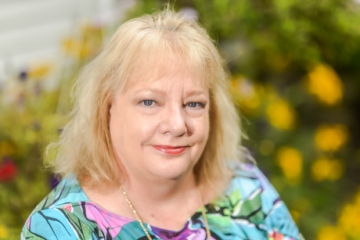 October 18, 2021 (San Diego’s East County) -- Billie Faye Owens, 63, a journalist in San Diego from the mid-1980s until 1996, died at Rochester General Hospital in New York on Oct. 15 from complications from congestive heart failure.

She was taken to United Memorial Medical Center in Batavia, NY, with health issues on July 26 and remained hospitalized for 81 days. At no time did she test positive for COVID-19.

She was born in 1958 in Charlotte, N.C., to Barbara Jean Carter and Billie Eugene McSwain. Her mother moved her when she was 5 to San Diego where she would eventually attend San Diego State University, earning a B.A. in Journalism.

She went to work for the Daily Californian in El Cajon, Calif. in 1989, where she met her second husband, Howard Owens, then a wire and copy editor at the Daily Californian, and currently publisher of The Batavian in Batavia, NY. They were married on the campus of Point Loma Nazarene College in 1993.

Her journalism career began with internships at the Chula Vista Star-News and the Los Angeles Times and included stints at the San Diego Business Journal, the Ventura County Star, and the Canandaigua (NY) Daily Messenger.

She won numerous regional and statewide journalism awards in San Diego for her writing and reporting.

She was passionate about her craft and one thing Howard and Billie bonded over quickly was the fact they both had substantial collections of books about journalism, which has grown to more than 400 titles over the years.  They also both enjoyed old movies with main characters who were reporters and editors.

She loved animals and was upset by anybody who abused animals.  She made it a mission to publish reports of people leaving dogs in hot cars and made local animal abuse cases her beat in Genesee County.  She was also well-known for her colorful reports of lost and missing pets and shelter animals in need of adoption.

In 2015, Howard and Billie adopted Rocky, a mix-breed pit bull who had been abused by a previous owner.  Rocky succumbed to cancer on July 31.

Billie is survived by her husband and three grandchildren, whom she loved.  Her mother, Barbara France, passed away in December in San Diego.

In lieu of flowers, donations can be made to the Genesee County Volunteers for Animals in the name of Billie and Rocky.  There will be no local service. Her wishes were that her ashes be deposited in the Pacific Ocean off the Ventura County Pier, where the ashes of her son, Charles Raymond Sutherland, were deposited in 2018.