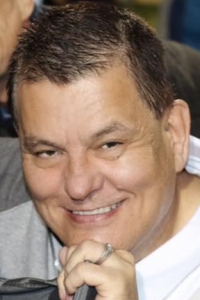 By Paul Kruze, Contributing Editor
Photo: Buddy Rubaya
May 6, 2020 (Santee) -- Stalwart Santee community leader Buddy Rubaya, a strong advocate for local mobilehome owners, passed away on April 28, 2020 after suffering a stroke on March 25.
Rabaya was born in Brawley, CA on May 14, 1961. He later moved to Oceanside, where he graduated in 1979 from El Camino High School. During his high school years, he was a star tennis player and was on the speech team. He later continued his studies at Palomar College, where he was also active in student politics and served as executive vice president of the student body.
His active participation in Santee led him to become president of the Santee Mobilehome Owners Action Committee (SMOAC), lobbying for residents rights including rent control. In the same vein, he was appointed regional manager of the Golden State Manufactured Home Owners League’s political action committee.
In 2015, he married local resident John Hossick in a ceremony officiated by Santee City Councilman Rob McNelis. The couple met in 1999 and became known for organizing programs benefiting young people, families and seniors throughout the Santee mobile home community.
Those activities have included giveaways of backpacks, a “SMOAC Elves Adopt-A-Senior program, Mother’s Day Luncheons, Easter basket giveaways. Other activities have included organizing a food pantry for the Meadowbrook mobile home communities. 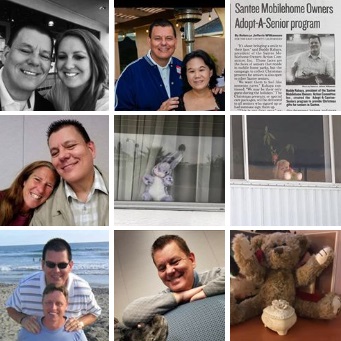 Photo, right: Rabaya's wall on Facebook
“If you live in Santee, your life has been touched directly or indirectly by Buddy. Buddy’s passion, some might say obsession, was to help seniors. Whether it be to feed those with food insecurities, finding resources for medical or financial issues, or just to simply lend an ear and give a hug, Buddy was there,” Santee City Council member Laura Korval told the San Diego Union-Tribune. “Buddy was there. Buddy and John were the dynamic duo, the ‘Git-R-Done’ dream team in our community our community. I will miss his laugh and his smile.”
In 2018, Rabaya was recognized for his tireless devotion to the community when he was named the Santee Chamber of Commerce’s “Citizen of the Year.”
"Buddy helped bring people I to volunteerism. His magnetic personality attracted those who helped others. Buddy's charm, was his greatest strength,” said L.Samson Osburn, another active member of the Santee community.
Besides his work in the community, Rabaya was known for his nightly positive affirmations on social media wishing his friends and adopted families “a good day.” 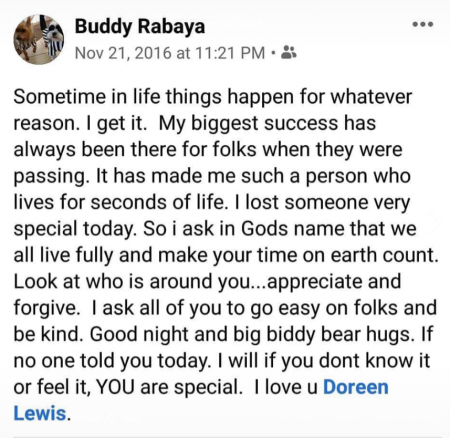 Kristen Dare, Chief Executive Officer of the Santee Chamber of Commerce, noted Rabaya’s ability to put programs in place which ended up benefiting every member of the community. “He wanted people to give where they can, where they can, to make us all stronger, as we are all obviously better together,” Dare said, the San Diego Union-Tribune reported.
According to Santee resident Dan Bickford who was close to Rabaya and Hossick, a community memorial event is planned in the coming months and will be publicized for all to attend.
Rabaya leaves behind his husband, John Hossick, 49, his son from a previous marriage, Buddy Shane Rabaya, 39, in Las Vegas, and a sister, Shelly Tampon, in Vista.
After news of Rabaya’s passing became known to the general public, Hossick wrote on Rabaya’s Facebook page:
Something a little special from me to you.. Buddy Rabaya my dear love... you gave me 20 plus years. You loved not just me but all around us unconditionally....I have purposely shared your words and memories in your Buddy Rabaya bear hugs goodnight... since March 25th, 2020...
I will let them hear, you our Person of the Year... and how you touched our lives! You gave me what most only dream of.. beautiful days and nights filled with love, joy, hugs, and knowing the whole world loved you and me.. too.! You gave me a world filled with love. I gave you my steadfast support and my heart unconditionally... God has work for you up there and here..! You dreamed big ..you had us hear on earth now you also have those waiting for you in heaven. Please give them a hug for me.. and I will do what I can here ...as always..
Love John and Bandit.
Copyright ©2020 by PaulKruzeLive.com, All Rights Reserved
Follow Paul Kruze at facebook.com/paulkruze and Twitter @paulkruzenews