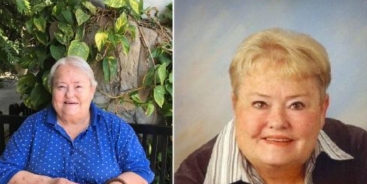 Will Rodriguez-Kennedy, Chair of the San Diego County Democratic Party, issued a statement which reads in part, “There are those who lead their lives with passion, and love and walk in the world with purpose and kindness.Cindy Green lived a life of service and advocacy. She cast a giant shadow as she played an instrumental role in elevating giants. She gave all for Women's Rights, for the right to universal healthcare, and for the equality of the LGBTQ+ community of which she was one of our staunchest allies.”

She worked for 30 years to help elect candidates to local offices and most recently supported Senator Elizabeth Warren’s presidential campaign.  She also served as vice president of development for San Diego Democrats for Equality.

Services are pending. Dorr has set up a Go Fund Me site to help cover funeral and memorial service costs at https://www.gofundme.com/f/paying-tribute-to-cindy-green.  Any extra funds will be donated to the San Diego Humane Society, says Dorr.

Many of her friends voiced shock to learn that she was found deceased in her home over two weeks after her last social media post.  Rodriguez-Kennedy writes, “In her passing she teaches us yet another lesson: Hold your friends and oved ones close. Check in on one another.”

Having a plan for someone to check up on you if you live alone is a wise precaution in case of illness or injury.  If you know a senior, disabled or shut-in resident locally who lives alone and does not have family nearby to check up on them, the San Diego Sheriff’s You Are Not Alone program provides daily phone calls and weekly visits. View the YANA program brochure. The free service has been credited with saving lives of many people locally.