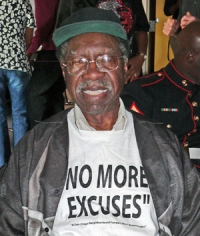 Memorial service has been moved to Bethel Baptist Church on Jan. 24. See details below.

Photo: Carrol Waymon PhD, watching the inauguration of President Barack Obama during a celebration at the Malcolm X Library in San DIego in January, 2009.

January 12, 2020 (San Diego)--San Diego’s most prominent civil rights leader, Carrol Waymon PhD, passed away in early January at age 94.  As executive director of San Diego’s first human rights agency, the Citizens Interracial Committee, he was a tireless fighter for justice who broke down many barriers for people of color.

Born May 15, 1925, Waymon was the grandson of a slave and son of a Methodist minister.  He was one of seven children, including his sister, the late jazz musician Nina Simone. While working on the Los Angeles Human Relations Agency in 1964, he was asked by San Diego's City Council  to come to San Diego and help address racial issues. He moved here and never left,  leading the Citizens Interracial Committee and devoting his life to attaining equal rights for all.

ECM interviewed Waymon in January 2009, during a local viewing of the inuauguration of Barack Obama, our nation’s first African-American president.  For Waymon, who once served as San Diego’s delegate to the funeral of Martin Luther King, Jr., Obama’s election was a major milestone hailed by Waymon.  “It is incredible to me. I couldn’t imagine at that time in 1968 that we’d have a black president 40 years later,” he said.

Waymon recalled that when he first came to San Diego, “Police beat up black kids and brown kids. There were restrictive housing covenants.”  He championed efforts that integrated housing communities not only for African-Americans, but others including Jewish people in La Jolla.

A teacher and author of 15 books, Waymon led a series of historic City Hall meetings and grass-roots forums around San Diego four decades ago, after race riots across the nation.  He also played a key role in a lawsuit that forced desegregation of San DIegoi City Schools. “That began in my office,” he said with pride.

The Citizens Interracial Committee was dissolved in 1969 after an incident in Mountain View Park that resulted in death of a black youth, several injuries and arrest of 115 people.  A report by the committee criticized police for sparking the confrontation into a “serious disaster.” Soon after, the city launched an investigation of the committee that resulted in its termination in December 1969. But in its few short years of existence, the committee’s accomplishments were vast—and Waymon continued his advocacy for civil rights throughout his lifetime in other ways.

In a second interview with ECM in 2009, during a 40th anniversary of the Citizens Interracial Committee, Waymon recalled in his own words some of the accomplishments of which he was most proud:

One of his best-known books, On Being Black in San Diego—Anytown USA was published in 1994.  He also amassed an impressive library chronicling San Diego’s turbulent civil rights history, which was acquired by San Diego State University for future scholars and posterity.

Waymon received many honors in his lifetime.  He was honored by KPBS TV as a Local Hero in 2013.  He received the Jackie Robinson YMCA Dr. Martin Luther King., Jr. Huma Dignity Award.  He was also honored with the Somali Youth United Community Award. Waymon was slated to be Grand Marshal in the 2020 Martin Luther King Jr. Day Parade in San Diego, but died days before the event.

“Many young people have no appreciation of the struggle that Carrol Waymon went through,” Lemon Grove resident Clara Harris, director of the Heartland Human Relations Agency in East County that Waymon helped establish, told the San Diego Union-Tribune in 2008.

Waymon reflected in 2009 that “San Diego is a different city today,” citing changes in employment law as among the most lasting accomplishments.  But despite progress made, he noted there was still a long way to go--and voiced his hope of passing the torch to the next generation.

He voiced concerns over a shortage of people of color in the media, setbacks to desegregation in education, some racial inequalities that still exist in law enforcement despite improvements, and a prison system he called “the new plantation” due to the high incarceration rate of Blacks.

Our last interview with him was long before the current administration of Donald Trump and a rise in racial tensions.  Waymon closed his 2009 interview with ECM by offering up his hope for the future, to see San Diego “create a mechanism for working toward greater harmony and openness in society.”

The ACLU Foundation of San Diego and Imperial Counties posted a message upon learning of Waymon’s death praising his many successful achievements in the fight for equal rights and racial justice.  The ACLU’s message concluded, “Rest in Power!”

Viewing: (Confirmed) Thursday, January 23rd @ 5pm Anderson-Ragsdale Funeral Home 5050 Federal Blvd San Diego CA 92114 Services: (Confirmed) Friday, January 24th @ 11:00 am Bethel Baptist Church 1962 North Euclid Ave. San Diego, CA 92105
Salt of the earth is an understatement in describing a pillar of San Diego, Dr. Carrol Waymon. I first came to know him while being an older student at San Diego Mesa College where my Mother served on the Faculty Senate and was a beloved professor for many years. I remember Dr. Waymon's face the night Bill Clinton was elected President. Man, it was lit up like the City of Light! He was overjoyed. Part of the big three who enabled me in local politics. It was Bates, Stevens and Waymon. Dr. Waymon instinctively knew when a fellow American was getting a raw deal. He had empathy. I will forever remember his kindness amid the despair of so many fruitless attempts at public office but ironically it was the 2008 campaign of Barack Obama that finally won me an election on the San Diego Municipal ballot. RIP Dr. Carrol Waymon.