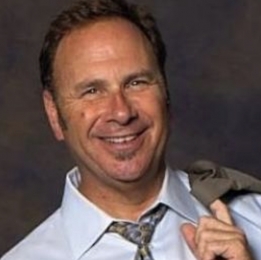 March 10, 2022 (San Diego) – He often said he’d been making people laugh since June 1957, when he was born. Yesterday, the laughter stopped when Russ Stolnack, Jr., aka Russ T Nailz, died at age 64. The long-time East County resident was a multiple Emmy award-winning entertainer best known as a comedian, radio host, musician and celebrity auctioneer for charities.

On his Facebook page, he celebrated “making a living doing what I love.”

He also died doing what he loved, while filming "On The Air."  His  long-time TV and radio cohost, Robert “Sully” Sullivan, said Stolnack “was signing a song with the house band when he had a heart attack, and – just like that – he was gone.”

91X announced the entertainer's passing on Twitter, posting, “The 91X family is sad to share the news that comedian, friend, legendary San Diegan and former 91X morning show host Russ ‘T. Nailz’ Stolnack has died. Russ, thanks for all the laughs! May he rest in peace.”

He grew up in La Mesa along with two siblings, where his father, Russell Wilbur Stolnack, moved the family around 1963, according to his father’s obituary.

As part of the Helix High School class of 1974, he was voted ASB’s outstanding representative and listed himself as a “drama freak”  according to his Linked in page, which lists his top “education” as  the ”University of Life and Humor” with a first-degree back belt in sarcasm.”

He got his start in comedy  in the ‘70s, soon rocketing from stand-up gigs in SDSU frat houses to performances in Las Vegas.

He co-hosted On the Air KUSI TV and Radio with Robert “Sully” Sullivan and Little Tommy Sablan.  Previously he co-hosted the morning show “Nailz and The JET” on 91X radio, as well as KPRI Radio’s “Rock and Religion,” among other notable gigs.  In addition, he hosted “The Big Show” on Fox Business Channel, a nationally syndicated money talk radio and TV show.

He won six Emmy awards, as well as a Cable Ace Award and the National Speakers Association Comedy Idol Contest.

A talented mimic, he gained fame for his parody of “Anchorman” character Ron Burgundy.  He also performed at numerous local business and charitable events, including East County Magazine's 2009 holiday party.

He was also a corporate speaker and emcee at countless events, according to his website, RussIsFunny.com.

Music became a key part of his life and performances, in which he often played guitar while impersonating famous singers, though he also performed classic songs with friends and in a duo with Nacho or Miles Pelky on drums.

On Gigtown, he wrote, “I am an Emmy winning actor, radio host, stand-up comedian who happens to play the guitar and sing...and whistle too! Some of his music can be heard and seen at the Hammerock website that he started.

Tributes to Nailz have poured in.

Former San Diego Mayor Kevin Faulconer posted on Twitter, calling Russ T. Nailz “a true San Diego legend who shared laughter and joy with all of us for decades. He was a friend who had a heart of gold and always brought a smile to everyone he met.”

San Diego Music Awards posted, “We at SDMA are sad to hear of the passing of longtime San Diego funnyman Russ T. Nailz.  Russ hosted the SDMAs in 1992 and 1993, andhas presented many awards over the years. Our thoughts go out to his family and many friends. RIP Russ. You will be missed by so many.”

Russ died suddenly without any warning as a result of a Aortic Aneurysm. He was my First Cousin on my fathers side. His family came here the same time mine did from Chicago in the mid 50's. We went to Helix High School together and are very close to his family. His mother is 92 and resides in La Mesa. RIP Cuz. We miss you!

I knew Russ in high school, too; what a loss for the community.

Is there an autopsy report or doctor's report?  His partner who was with him at the rehearsal where he died had said it was a heart attack. If that's inaccurate, we'd like to correct it for the record but don't want to have to correct a correction.

if he died of covid being a right-winger! when they do not mention cause of death one can only wonder.
He was a right winger and he did not have Covid.

to his partner who was with him when he passed. I've updated the article to include this. Sad, but at least he died doing what he loved.