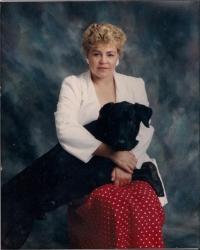 “Cyndy, while seriously disabled herself, created and managed over the years two service dog training groups,” said Hope Goodwin, a client who owns a service dog obtained through Clay. “I believe that Cyndy's training group is the only one in the U.S. that teaches the disabled how to train their own Service Dogs,” she said of the two-year program.

She added, “This makes for a stronger and better bond between the dog and its person. It also means that the dog actually belongs to the disabled person. No group which has trained that dog can, for whatever the reason, take that dog away from its person. Imagine finally being able to be independent again. To go where you want, and do what you want without having to have a human caretaker controlling you.”

Clay mentored people not only in training their dogs, but in dealing with the issues facing so many of the disabled, such at which agencies could provide help. She was always accompanied by her faithful canine companions, Napolean and Keebler.

She was a nationally known speaker for medical health professionals, educators, and those studying the animal/human bond. She was the United Way CHAD’s most requested agency speaker for several years, according to her bio. A marriage and family counselor with Oak Knoll Family Therapy Center in Poway, she earned her bachelor’s degrees in business administration and psychology from the University of Eastern Connecticut and a master’s in counseling from National University in San Diego.

Goodwin said she was inspired by Clay’s accomplishments despite severe disability. “She taught me humility through her uncomplaining example, her shining sense of humor, and her gracious show of love and generosity,” she said.  "Cyndy Clay will be greatly missed and yes, Cyndy Clay was and is still greatly loved."