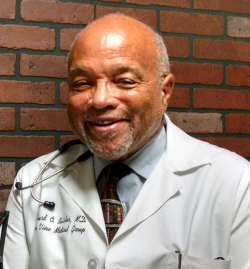 Dr. Butcher was  highly respected in San Diego’s medical, philanthropic and sports communities,  as well as at the national  level.   Last year, he received the National Medical Association’s Practitioner of the Year Award.

Dr. Butcher was a local champion of combating chronic diseases in low-income neighborhoods and co-founded the Multicultural  Medical Group, along with Dr. Hood,  to find community-based solutions to health disparities in the San Diego region.  Those efforts led to  a $1 million grant in2012 to study patients with chronic medical needs. That work led to savings of $4 million on emergency room visits.

In awarding Dr. Butcher the Practitioner of the Year award for those efforts last year, Dr. Lawrence L. Sanders Jr., NMA president,  stated,  “We believe that when the history of this dynamic struggle is written,  your name will be deeply etched in its fabric as having inspired and challenged physicians and medical professionals nationwide to address critical issues of health care and medicine.”

Dr.Butcher received his medical degree from Meharry Medical College,  then joined the Navy. He treated sailors on transport ships during the Vietnam War.  He later worked at several hospitals in Southern California before opening up his practice in San Diego, where he had been stationed during part of his military service.

“He loved seeing patients, he loved working in medicine,” his partner, Dr. Hood,  stated, the San Diego  Union-Tribune reports.  His daughter,  April Noble, recalls that her father  always took time to listen to his patients,  a rarity in an era of managed care.

He and his wife, Vickie Butcher, co-founded the nonprofit Water for Chlidren African, providing safe and sustainable drinking water to rural villages in Africa as well as educating people about safe health practices.

In El Cajon, he volunteered as team doctor for Granite Hills High School for over 35 years and also served as general physician for the Amateur Boxing Association of San Diego.

He is survived by his wife,  Vickie,  executive director of Water for Children Africa and a former El Cajon Planning Commissioner who recently ran for City Council,  along with their five children:  Richard Butcher,  April Noble, Kelly Butcher,Langston Butcher, Crystal Butcher and foster daughter Gina Clifton, as well as six grandchildren.

A memorial service open to family, friends and colleagues will be held on Saturday at 1 p.m. at Point Loma Community Presbyterian Church, 2128 Chatsworth Blvd.

The Multicultural Health Foundation plans to establish a memorial fund in Dr.Butcher’s  honor to provide medical school scholarships.  Information on how to donate will be posted at www.mhfwellness.org .