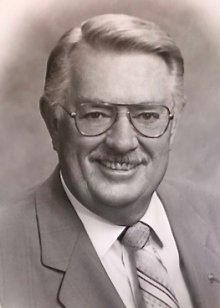 October 6, 2017 (San Diego's East County) - Known for his generosity in support of East County community organizations, businessman William “Bill” Thomas Verbeck passed away at his home in Spring Valley on September 27 at the age of 90, with friends by his side.

Bill was a successful local businessman and real estate developer.  He and his wife Norma owned Grossmont Escrow Company in La Mesa for more than 25 years, and he served several terms on the Helix Water District Board.  He was a long-time member of the Kiwanis Club of La Mesa, as well as the El Cajon Elks Lodge, and the Free Masons.  Bill was also a member of the La Mesa Volunteer Police Patrol.

Benefitting from his commitment to giving back to the community have been Sharp Grossmont Hospital Foundation, Cuyamaca Water Conservation Garden, Home of Guiding Hands, the Salvation Army, Boys and Girls Club of East County and Indian Hills Youth and Family Camp in Jamul.

Bill Verbeck was born July 15, 1927 in Funk, Nebraska, to Arthur and Nina Verbeck.  From his humble roots on a Nebraska farm, he enlisted in the U.S. Air Force and served a short time in Hawaii.  Returning to Nebraska, he married Norma Mae Krisl.  Theirs was a marriage and a partnership lasting 64 years.  Norma preceded Bill in death in 2012.

He is survived by his sisters: Betty Coburn, Ardith Bendler and Joanne Horn.