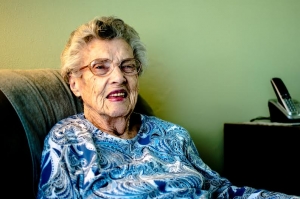 Born March 20, 1918, in Nebraska, to Arthur I. Davis and Alma M. Davis (Becker), Leoma moved with her family as a baby to Huerfano County near Walsenberg, Colo., where the Davis family set up a homestead (establishing a ranch that remains in the Davis family to this day).

On April 18, 1936, Leoma married Howard Benjamin Owens, of La Veta, Colo. Howard drove a dynamite truck for coal mines in the area and on his routes, Leoma, cradling their first child in her arms, would ride along and keep her husband company.

With the coming of World War II, the Owens family moved to San Diego, where Howard and Leoma both worked for Convair. Leoma, in the spirit of “Rosie the Riveter,” installed wiring on B-24 bombers. After the war, the family returned to Colorado for a couple of years, but in 1950, moved to El Cajon and purchased a small pink house on Peach Avenue, where Leoma lived for the remainder of her life.

For a number of years, Leoma worked as a clerk at the JC Penney store in Downtown El Cajon. In the 1980s she worked part-time for her son, Howard, Jr., at Howard’s Bakery in El Cajon.

Howard Sr., who spent most of his career with aerospace contractors in San Diego, including a stint working on the space shuttle program in New Orleans, succumbed to cancer in 1980.

Leoma always enjoyed writing and wrote numerous books, including an autobiography, mysteries, romances and historical novels, along with several short stories and articles for various publications, including Reminisce Magazine and The Daily Californian.

A Christian, Leoma read her Bible daily and taught Sunday School for decades at the Wesleyan Methodist Church in El Cajon. Leoma was among the members chosen to help break ground in a dedication ceremony for a new church building.

Later in life, she became an avid San Diego Padres fan, rarely missing a televised game, but is known to have attended only one home game, about 25 years ago.

Services are at 10 a.m., Nov. 8, at Wesleyan Methodist Church, 1500 Lexington, El Cajon, followed by a reception. Burial will follow with family at Greenwood Cemetery in San Diego.

In lieu of flowers, please donate to a literacy program in your community.