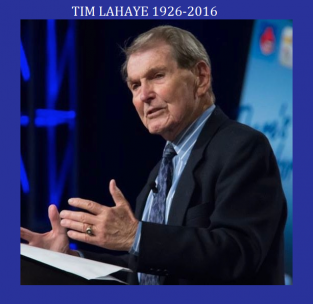 July 25, 2016 (San Diego’s East County) – Evangelist Tim LaHaye,  co-author of the best-selling “Left Behind” Christian book series and founder of local Christian schools, died today at age 80 in a local hospital of complications from a stroke.  Time Magazine once named LaHaye among the 25 most influential evangelicals in the U.S.

Born in Detroit, Michigan on April 27, 1926, LaHaye served in the Air Force as a machine gunner aboard a bomber during World War II.  He received a Bachelor of Arts from Bob Jones University and a Doctor of Ministry from Western Seminary before moving to San Diego with his family in 1958.

He served as pastor at Scott Memorial Baptist Church, which expanded to three locations including what is now known as Shadow Mountain Community Church in El Cajon.   He also founded San Diego Christian College, originally in El Cajon and later Santee, and Christian high schools.  In addition he donated $4.5 million to Liberty University to build a student center and School of Prophecy, serving as the school’s president.

He authored 50 books including the “Left Behind” series co-authored with Jerry B. Jenkins.  The apocalyptic fiction series depicts Earth after the rapture prophesized in the Bible.  Seven titles in the series became number one on the bestseller lists for the New York Times, USA Today, and Publisher’s Weekly.

LaHaye co-hosted a prophecy television program, The King Is Coming. Also a political activist, he helped found the Institute for Creation Research at Christian Heritage College in El Cajon and encouraged Jerry Falwell to found the Moral Majority, serving on its board of directors.  He also helped found the Council for National Policy, a conservative think tank, as well as the American Coalition for Traditional Values and the Coalition for Religious Freedom.  He briefly served as co-chair of Jack Kemp’s presidential campaign in 1988 and later backed George W. Bush’s successful presidential bid.

He is survived by his wife, Beverly, four children, nine grandchildren, 16 great-grandchildren, a brother and a sister. Funeral services are pending.

He remained active until shortly before his death. On July 21st, he sent his final message out on Twitter, a Bible passage from Matthew 6:19-21: “Don’t store up treasures here on earth where they can erode away or may be stolen. Store them in heaven where they will never lose their value and are safe from thieves.  If your profits are in heaven, your heart will be there too.”