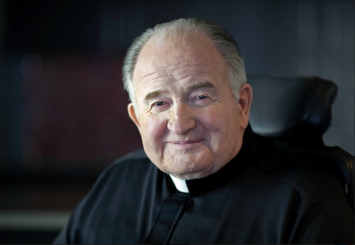 “Father Joe Carroll stands distinguished in our county and in our nation.” – Bishop Robert W. McElroy

Update: For those who missed the celebration of life, you can view it, along with a memorial wall, here:

July 11, 2021 (San Diego) – Father Joe Carroll, the Catholic priest famed for his leadership to help the homeless, died this morning at his home in the East Village at age 80. The President of Emeritus of Father Joe’s Villages leaves behind a profound legacy of compassion and decades of accomplishments to help people in need.

A private funeral mass will be held with Carroll’s close friends and family. A public celebration of life and other memorial events will be announced soon.  The public is invited to leave flowers and messages in a designated space next to Father Joe’s Villages’ Joan Kroc Center on Imperial Avenue between 15th and 16th Streets.

Born in the Bronx district in New York in 1940, along with seven siblings, Carroll moved to Southern California in 1963, where he entered the seminary.  He was ordained a priest in 1974 and served  at Our Lady of Grace parish in El Cajon from July 1974 to June 1977. In 1982, Bishop Leo Maher named Carroll to lead St. Vincent de Paul Center based on his record of building community connections and his success at fundraising.

Carroll's biography,  Father Joe: Life Stories of a Hustler Priest, recounts his reputation as a wheeler-dealer from his youth in the Bronx, a label Carroll embraced. A $3 million donation from the late philanthropist Joan Kroc provided seed money for the St. Vincent de Paul Joan Kroc Center, which opened in 1987, providing shelter, job training, medical care, meals and childcare all under one roof to address the root causes of homelessness.

This was followed by the Bishop Maher Center in 1989 and several subsequent affordable housing complexes in San Diego, as well as in Indio and Las Vegas.  By 2015, the organization was named Father Joe’s Villages in his honor. Today, Father Joe’s Villages provides housing for over 2,400 people each night, along with services to help them rebuild their lives.

Dean Jim Vargas, President and CEO of Father Joe’s Villages, issued this statement today.  “Though I am personally saddened at Father Joe Carroll’s passing, I fondly remember the stories and laughs that we shared, and his legacy will live on in all that we do. Father Joe selflessly and tirelessly served our community for over three decades. We celebrate his lifetime of service.”

Bishop Robert W. McElroy at the Roman Catholic Diocese of San Diego, recalls Carroll as “a priest who made Christ’s message of compassion and mercy real in a world where we so often look the other way, rather than embrace those who are suffering in our midst…Father Joe taught so many of us in San Diego to see the homeless as truly our neighbors, equal in dignity and children of the one God who is Father of us all. In this deeply pastoral ministry, Father Joe Carroll stands distinguished in our county and in our nation.”

East County Magazine book reviewer Dennis Moore wrote in April 2021 that Father Joe Carroll’s actions “border on Sainthood,”  a view he learned firsthand.  “I once lived in the St  Vincent DePaul Villages homeless shelter for a short period of time after coming here to San Diego from Chicago,” Moore recalled in a review of Carroll’s memoir, “not knowing a soul and with two bags of possessions in my hands.”  At St. Vincent’s, Moore found treatment for PTSD.  “For that, I am eternally thankful and grateful that there is a Father Joe in this world,” he wrote, adding that the help he received there “changed the trajectory of my life.”

Carroll’s biographer, Kathryn Cloward, told ECM on learning of Carroll's passing, "Father Joe had a positive impact on the lives of so many people, including me. I got to spend a lot of quality time with him the last two years and he filled a fatherly role for me that I had been missing deeply since my dad passed. Father Joe will be dearly missed by many yet I know his ripple effect of goodness will continue for generations to come."

Cloward's book included several quotes from Carroll that sum up the larger-than-life man’s humble views and urging of others to show compassion to all.

“I have lived a joyful and fulfilling life,” Carroll told readers in his biography. “Within the passages of this book, I pass along some seeds of goodness. Perhaps you will pass seeds of goodness along to others. And so it goes as we help each other grow through life.”

Of his faith, Carroll said, “I do my best to be and live as close to how Jesus lived as possible – and that means doing my best to be respectful of everyone.  When Jesus said love your neighbors as yourself, He meant everyone.  Jesus didn’t say love only people who believe like you, look like you, live like you.  Everyone. Everyone is our neighbor.”

The book shared his experiences including times when Carroll was down on his luck, fired from jobs, once expelled from the seminary, and hustling to help his family as a child.  “Joey” Carroll started working at eight years old, according to Cloward, once earning money by running errands to help his Jewish neighbors on the Sabbath.  He also sold Christmas trees, worked in a butcher shop and held other odd jobs to make ends meet. In his youth, he was active in Boy Scouts and in his later years, regularly attended ceremonies to honor Eagle Scouts when invited, Cloward recalled.

Reina Menasche, East County Magazine Radio Show’s Bookshelf host, interviewed Cloward, Carroll’s biographer, in a segment which aired in June. Carroll was recovering from surgery and unable to participate in the interview. “He is an icon in San Diego,” she said of Carroll, a Monsignor in the Catholic Church.  Cloward, who has known Carroll since her childhood as  a parishioner at Our Lady of Grace church in El Cajon, cited his “entrepreneurial spirit” in his work to help so many San Diegans, while recognizing that “education is empowerment” to transform lives, “all rooted in dignity and respect.”

Emmy Award-winning journalist J.W. August posted this remembrace on Facebook after learning of Carroll's passage. "Father Joe was a terrific advocate, with a self deprecating sense of humor and smart as hell. A great deal will be written about him in the next few days because he was an icon of our community."  In a quip worthy of Carroll, August added, "He was a class act and is no doubt hitting up Saint Peter for a contribution to his life’s work—RIP."

How does Carroll wish to be remembered?

In his biography, he stated, “The greatest honor in my life has been being a priest and it’s been my desire to follow in the footsteps of Jesus to the best of my ability. In addition to Father Joe, there will be five words on my gravestone: `He was a good priest.’ It won’t say great or exceptional; `good’ is the word and good is good enough for me. Perhaps by reading this, you will discover that good is good enough for you in your life, too.”

Learn more or make a donation in his memory, visit the Father Joe’s Villages website .

My heartfelt condolences go out to the family of Father Joe Carroll for his recent passing! I was honored to have written the referenced book review about this San Diego icon, who was instrumental in my son coming here from Chicago and graduating from CalArts in Valencia, one of the leading schools for actors in the world. He will truly be missed.