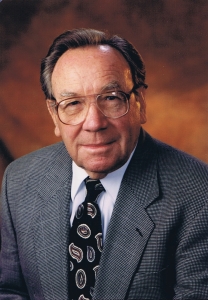 Born in Mesa, Arizona in 1925, his family moved to California when he was a young teen.

Stoney graduated from Sweetwater High School in 1943. Immediately afterward he served in the Army Air Forces from 1943-1946. Stoney married his beautiful wife Bonnie in 1955. During their 54 year marriage, the two shared five children, four grandchildren and two great grandchildren.

Stoney’s first business venture was a market he opened in El Cajon called Stoney’s Rock & Roll Market on Jamacha Road. After the family closed the market, Stoney ventured into the banking industry and became President of Cajon Valley Bank. He retired in early 2000 from Temecula Valley Bank.

Stoney’s greatest passion, aside from his family, was helping underprivileged children. From that passion he founded the East County Toy and Food Drive, now headed into its’ 41st year. The drive has since become East County’s largest Holiday charity collection event.

Fourteen years ago, Stoney asked the Salvation Army to join the drive as their organization was better equipped to distribute the large amount of food and toys collected. After hosting the Holiday party for the drive for several years, Viejas Casino & Resort took on a major role and donated thousands of toys annually. It is now estimated that directly due to Stoney’s efforts and initiative, $50-$60 thousand dollars is raised for families and the children of East County through the Toy and Food Drive annually.

Over 20,000 families and over 50,000 children have been assisted by Stoney’s annual East County Toy & Food Drive. As a result, because of Stoney, thousands of East County children have a happier and merrier Christmas.

Twenty-four years ago, Stoney received a call from El Cajon Police requesting assistance in seeking funds for a D.A.R.E. program. Stoney called some business acquaintances and they formed a nonprofit organization to raise money for the program. From that effort it evolved into Stoney’s Kids and now Stoney’s Kids Legacy.

Through Stoney’s Kids, Stoney was able to continue to assist underprivileged kids through-out the year. Stoney’s Kids has raised over $800,000 since 1991 to fund programs and provide needs for East County kids.

Sycuan Resort has hosted Stoney’s Kids annual Birthday Party for several years and has become large part of the Stoney’s Kids family and it’s success. To sum up Stoney’s Kids [Legacy], as Stoney himself put it, “It’s All About the Kids.”

Stoney’s other civic responsibilities and accomplishments include:

It wasn’t long before Stoney became known in his community of San Diego’s East County as "Mr. East County."

I bought my first home from him. Very nice man & easy to deal with. R.I.P. Stoney