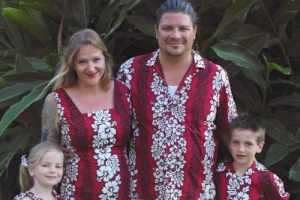 July 9, 2017 (San Diego’s East County) – Spring Valley resident Gregory Lawrence Scott, the father of two young children and husband of The Alpine Sun’s former editor Christy Scott, was killed in a car accident on I-15 on June 17th.   A GoFundMe page has been set up to help Christy and the couple’s children, Jacob,and Isabelle.

“Greg will be remembered as a loving husband and father, a beloved son and brother​, and an immense nerd and rabid hockey fan,” the Go Fund Me page states. He was on his way home from a hockey game when the accident occurred.  A long-time employee of Crownair Aviation, he moved to the area shortly after marrying Christy, his high school sweetheart in 2003.  He was the sole support of his family.

Lori Bledsoe, current editor of The Alpine Sun, wrote in an article on the family’s tragic loss that the couple had been together for 23 years and that for Christy, Greg was “the love of her life.”

Christy served as editor of the Alpine newspaper for six years and as a reporter before that.  A devoted newswoman, her determination to be a “good wife and mother” eventually led her to resign her post when the family followed their dream and moved to the beach.  Recently, they decided it was time to purchase a home and moved to Spring Valley, where they had room for a yard that included a garden, chickens, and room for children to play—children who lost their father just one day before Father’s Day.

You can donate to help the Scott family at https://www.gofundme.com/8ktfuv-the-scott-family.