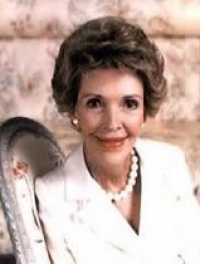 The actress who often said her life “didn’t begin until I met Ronnie” served as mentor and advisor, taking an active role in the White House when her husband, Ronald Reagan, was president. She also served as First Lady of California when Ronald Reagan was Governor.

Nancy Reagan became an outspoken fighter in the war on drugs with her “Just say no” campaign.  Though conservative, she crossed party lines to champion the Brady Bill to reduce gun violence after her husband was shot and survived an assassination attempt.

Later in life, when her husband was declining from Alzheimer’s, her devotion to him was evident as she scarcely left his side.  She also became an advocate for embryonic stem cell research opposed by some conservatives, recognizing the treatment’s potential to offer a cure for Alzheimer’s and other diseases. 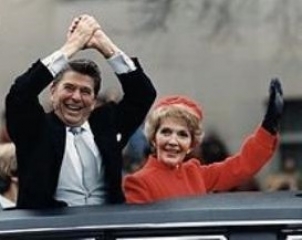 California Barbara Boxer issued a statement extending condolences to the Reagan family. She added, “She set an example as a First Lady who truly stood on her own as a force. She made a lasting contribution to the fight against Alzheimer's and her support of the Brady bill made the difference."

Congressman Darrell Issa (R-San Diego) praised Nancy Reagan’s “quiet dignity and personal resolve. To know her was to marvel at her tireless dedication and boundless love for her husband.” He added, "Nancy’s dedication to our country and her passion for the causes she believed in were second to none. Whenever we were together, from events at the Reagan Presidential Library, to the christening of the U.S.S. Reagan, nothing was more clear than just how much she loved ‘her Ronnie.’"

Issa concluded, "They say great men are nothing more than the ones who helped them get there. With Nancy, there’s no question that her unyielding devotion helped her husband achieve all that he did. I am honored to have had her friendship and she will truly be missed.”

Mark Arabo, a leader among Iraqi Chaldeans locally and nationally, said the passing of Nancy Reagan comes as a “huge loss” to the Chaldean community.  Nancy played a fundamental role in the Reagan administration’s policy towards refugees. The Reagan administration assisted in providing assistance to over 50,000 Chaldeans in coming to America, a release issued by Arabo’s office notes.

"Today, we lost an incredible soul,” Arabo said. “the Chaldean community mourns the passing of Nancy Reagan. She was a monumental figure that supported the rights of refugees globally. She directly assisted in providing a new home for over 50,000 Chaldean immigrants in the 1980’s. She will be missed, and she will continue to be remembered.”

Former California Governor Arnold Schwarzenegger called Nancy Reagan “one of my heroes,” adding, “She served as First Lady with unbelievable power, class and grace and left her mark on the world.”

Born in New York City in 1921, she got her first break in show business in the 1940s, landing a role on Broadway in “Lute Song” starring Yul Brynner and Mary Martin.  That led to a contract with MGM.  She made close to a dozen movies over the next decade.

Her first meeting with Ronald Reagan, also an actor, occurred when he was head of the Screen Actors Guild.  Nancy Davis found herself mistakenly blacklisted on a list of communist sympathizers, confused with another actress of the same name.  The two began dating and married two years later.  She co-starred with him in “Hellcats of the Navy.”

During Reagan’s terms as Governor and President, Nancy was sometimes criticized for pushing to design a new Governor’s mansion and spending lavishly on redecorating the White House at a time of high unemployment, though the funds for the latter were donated.  She made headlines again by ordering new White House china for state dinners in her favorite color: red.

As First Lady, she championed foster grandparents and veteran’s causes.  By 1985, she had higher poll ratings than her husband, President Reagan.

But she also drew controversy for her active role in advising her husband.  She defended her role staunchly, stating, “I’m the one who knows him best, and I was the only person in the White House who had absolutely no agenda of her own—except helping him.

She pushed for Reagan to take responsibility for the Iran-Contra controversy and was reportedly instrumental in forcing resignations of several top administration leaders including the president’s chief of staff, the secretaries of Labor, the Interior, Health and Human Services as well as two national security advisors, the Los Angeles Times reports.

She survived a mastectomy in 1987, the same year her husband battled prostate cancer.

She is survived by her children with Reagan, Patti and Ron, as well as stepson, Michael (her husband’s adopted son with his former wife, Jane Wyman), and three grandchildren. (Maureen Reagan, Ronald Reagan’s daughter with Wyman, died of skin cancer in 2001.)

She will be buried at the Ronald Reagan Library in Simi Valley, next to her husband, who died in 2004.

In her later years, even her critics came to voice admiration as Nancy Reagan steadfastly stood by her husband in his long battle with Alzheimer’s, joining the fight to find a cure for the devastating illness that robbed him of his memory and her of her life’s cherished partner.

Of her husband’s twilight years, or what  Nancy called a “truly long, long goodbye,” she stated on the Good Morning America show, “I learned patience. I learned how to accept something that was given to you, and how to die.”