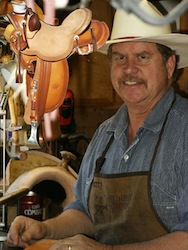 August 16, 2015 (Descanso) –For the past 43 years, Garry McClintock has been making saddles to outfit trail riders and cowboys across our region. On August 14th, the master  saddle maker passed away at his Descanso home. With his passage, a towering part of San Diego’s western heritage rides off into the sunset. though his memories live on.

East County Magazine’s “Sounds of History” host Helen Ofield interviewed McClintock for our radio show on KNSJ. You can hear the  series here, including McClintock discussing the art of saddlemaking in part 1 and the history of vaqueros in our region in part 2:

Ofield, also president of the Lemon Grove Historical Society, notes, "We (the Lemon Grove Historical Society) also videotaped his lecture on our "History Alive" series and made sure that he and his family received two DVDs of the tape.  The untimely passing of this remarkable man makes our efforts to capture on video the life and times of some of the extraordinary people who have shaped our part of the world all the more important.  There he is, "forever," in living color, surrounded by saddles and tools, wearing his big hat and sharing his skills and sense of history in inimitable fashion.What a tragic loss to his loving family and to the legions of friends, clients and McClintock saddle afficionadoes around the world.Garry was truly an American original.  He made sure that the originals who inspired him also were preserved on tape in his "Corazon Vaqueros" production."

Garry McClintock traveled to Baja, Mexico with his son, Cody McClintock and photographer Eve Ewing for the doucmentary film "Corazon Vaqueros." You can view video and learn more at the links below.

Corazon Vaqueros: The Heart of the Cowboy: http://youtu.be/gycdok8tHZU

McClintock's website, McClintock Saddle Works, has been disabled. But you can read more about McClintock in an interview he did with the San Diegio Union-Tribune in 2008, when he shared details about his craft: http://www.utsandiego.com/uniontrib/20080719/news_1ez19saddle.html

Ark and Tent also profiled McClintock, reporting that his hand-crafted saddles sold for up to $10,000 apiece, with a year-long waiting list. But the article concluded, “Still for many horse riders the world over, the wait is a small price to pay for having a piece of history from one of the West’s true originals.” http://arkandtent.com/animal_artistry_71.html.

His passage marks the end of an era; McClintock has  said he believed he was the last full-time saddle-maker in San Diego County.

He  was seriously injured in October 2014 in a motorcycle accident, breaking multiple ribs among other injuries.  The local equestrian community rallied around McClintock at the time, holding fundraisers to help cover his medical expenses.

Friends have posted memories of McClintock on his Facebook page: https://www.facebook.com/search/str/Garry%2BMcclintock/keywords_top

Lakeside Rodeo posted this tribute: “He touched so many, many people’s lives through his art of saddlery, leather goods such as chaps or just as a friend…His craftsmanship, his artisanal skills, were renown and his legacy of both talent and friendship will always remain in our hearts.”

Horse of the Sun Ranch posted this epitaph, “Garry was a true cowboy and we always appreciated his vision and participation in keeping the culture and traditions of the vaqueros alive for present and future generations.”

A notice posted on the Descanso Neighbors Facebook  Page by Cara Hamer states, “The memorial for Garry McClintock has been scheduled for the afternoon of Saturday, September 26th, 2015 in Descanso.”  Organizers are looking to incorporate a dinner and horse ride into the event, as well as “the opportunity for people to talk about Garry and how he impacted the lives. A committee has been formed to coordinate the event and we are working closely with his family.”

Friends are encouraged to join the committee, help with the event or speak at the memorial to help honor McClintock’s memory and help the family.  For more information, contact Martin Jorgensen at mgj82754@yahoo.com  or (619)307-0276.