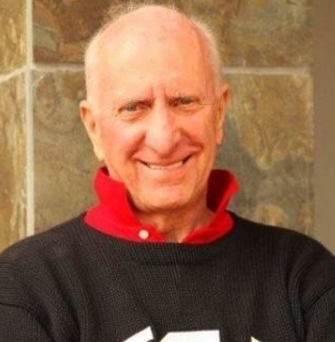 August 4, 2019 (San Diego) – A powerhouse on the local political and civic scene, City Club founder and president George Mitrovich died July 24 at age 83. A graduate of Helix High School in La Mesa, where he played baseball and basketball, he maintained a lifelong love of sports and the principals of democracy, fostering civil dialogue and discussion.

Born July 29, 1935, he graduated from Pasadena College, which became Point Loma Nazarene and later awarded him an honorary doctorate in Human Letters.

Passionate about politics, he was a press aide to Senator Robert F. Kennedy during the 1968 presidential campaign and later served as press secretary to both Democratic and Republican U.S. Senators and Representatives.

In 1975 he founded the City Club of San Diego as a nonpartisan public forum to discuss the major issues of the day. City Club was honored as the third best public forum in America in 2003. Mitrovich hobnobbed with the city’s powerbrokers and politicians, encouraging kindness and civility.

As a lay minister with the United Methodist Church, he preached in the National Cathedral in Washington  He co-founded the San Diego Coalition for Equality amid racial unrest regionally and helped lead efforts to ask Congress to consider a National Day of Unity.

He was named “Peacemaker of the Year” by the San Diego Mediation Center,”Man of the Year” by Pacific Bell, and received a community involvement award from the NAACP. The Daily Transcript listed him as one of the city’s “Top Influentials” in 2009.

Also a prolific writer who wrote for mamy major newspapers, Mitrovitch often wrote about sports, his life-long passion. He chaired the Great Fenway Park Writers  Series for the Boston Red Sox and chaired the team’s annual birthday tribute to Jackie Robison for many years.  He also spearheaded efforts to enact a bill to posthumously honor Robinson with a Congressional Gold Medal, which President George Bush presented to Robinson’s family in 2005.  He also played for the Mets in the San Diego Adult Baseball League including during three league championships.

He is survived by his wife, La Verle Sutherland, and their three children, Carolyn, Mark and Tim, as well as three grandchildren.

A memorial service will be held on Saturday, August 24 at 10 a.m. at the United Methodist Church in Mission Valley.  The family suggests donations to the George MitrovichMemorial in Journalism Scholarships at Point Loma Nazarene University, care of Dean Nelson, 3900 Lomaland Drive, San Diego, CA 92106 or online at www.PointLoma.edu/MitrovichA.