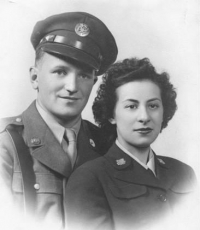 Memorial services in San Diego April 27 and May 1

Gladys Palast was a union activist with SEIU and the San Diego Teachers Union.  Until the age of 80, she was also a school teacher in Los Angeles then San Diego.  She and her late husband, Gil Palast, were cofounders of the La Mesa Democratic Club and Activist San Diego, owner of KNSJ radio.

The first woman to enlist in the Coast Guard during World War II, she will be interred with full military honors at Miramar National Military Cemetery, 5795 Nobel Drive, San Diego, CA 92122 today at 11 a.m. along with the ashes of her late husband, Gil Palast. A celebration of her life will follow at 1 p.m. in the rec room at 6780 Mission Gorge Road in San Diego, where friends are invited to bring memories, stories and songs to share. 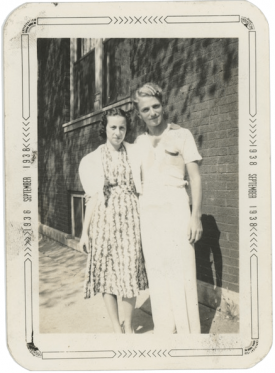 If you cannot attend, the family asks that friends  send thoughts in to share and keep as a living tribute.  In lieu of flowers, the family asks you to donate to her organization, Activist San Diego | Networking for Social Justice.  Further information is available at www.amisraelmortuary.com.

Her son, Greg Palast, states, “In addition, there will be a remembrance of mom’s life this Tuesday, May 1, at the San Diego premiere of my updated film, The Best Democracy Money Can Buy: The Case of the Stolen Election, in which mom and dad star (or at least, have the funniest cameo). It’s a fundraiser for KNSJ.org. All are invited to The Joan B. Kroc Theater, 5998 Alcala Park, San Diego, CA 92110.

Glady Palast continued her activism even late in life, attending meetings in a wheelchair and once, joining a union picket line despite being on oxygen.

Martin Eder, president of Activist San Diego, praised Gladys Palast as a “powerful example of a life lived to the fullest.  We loved her enthusiasm and warm greeting, her hospitality, her encouragement when we were pushing rocks up hill.” Gladys and Gil Palast were honored with the organization’s Lifetime Activist Achievement Award.

Eder has indicated that Activist San Diego will use donations to establishing a fund in Gladys  Palast’s name to benefit young activists and inspire young people “like Gladys, to keep on marching for the next 80 years.”

Our thoughts and prayers are with you Greg and family