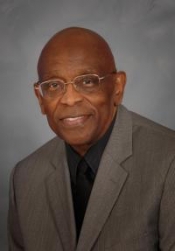 July 12, 2013 (El Cajon) --Colleagues on the Grossmont College campus are planning a special blood drive in conjunction with the Bloodmobile’s regular visit to the campus on Sept. 10.  They are urging blood donations in memory of Prof. Curtis Stevens, who was such a regal man that in joking awe they called him "His Royal Highness, The Emperor Curtis Stevens."

Blood donations in Dr. Stevens’ memory may be made not only on campus, but also at any of the six San Diego Blood Bank donor centers throughout San Diego County by mentioning his name and reference code C42.

Addresses of the centers may be found  at http://www.sandiegobloodbank.org/donor-centers

Stevens’ “empire” was the Grossmont College library, and one of his favorite areas of his realm was the history section.  Besides serving as chairman of the library department, Stevens also taught courses in American history. He remained an active academician into his late 70s.  Dr. Stevens retired from Grossmont College in June 2012; in April 2013, he was bestowed the honor of Professor Emeritus.  He died June 27 under home hospice care at his Mount Helix home.

In the 42 years that Stevens taught at Grossmont until 2012, he mentored many students, often multi-generational, including former student Barbara Farina and her daughter Nadra Farina-Hess, the current library department chair who began her career as a student worker under his tutelage.

She said a familiar sight at Grossmont College's library was a gathering of students and faculty near the reference desk listening to Dr. Stevens telling stories both from his life and from the books he read.

Stevens would tell about his life growing up in Florida, raised by grandparents who made him understand early in life the importance of an education.   He spoke with the glow of fond memory about the accomplishments of the Civil Rights movement, in which he participated.  Stevens

graduated from Lincoln High School in Bradenton, Florida at the age of fourteen, earned a Bachelor of Arts at age eighteen, and a Master of Science at age nineteen with degrees in History, Sociology, and Secondary Education from Florida A&M University.  Later he earned the Master of Arts degrees in History and Library Science at the University of Denver and in 1976 he competed his Doctorate degree from the University of California, Los Angeles.  Dr. Stevens maintained a lifetime interest in African studies and African-American studies.  One of the courses he taught at Grossmont College was U.S. History from a Black Perspective.

A sworn devotee of books, Stevens would often say that computers had their purpose -- for looking up specific information -- but for the sheer joy of serendipitous learning, there was nothing like a book.  "He would often flip through a book and start reading at a random page, and take joy in coming across a new idea or fact," said Farina-Hess. "His interests were so far-ranging that as recently as 2012 he gave speeches at UCLA and at UCSD Freshmen Experiences about quantum physics."

Stevens sometimes would walk back to his office lost in an interesting book and then when daily business would demand his attention, put the book down, forgetting to return it to the shelves.  Farina-Hess said she and other librarians would make occasional sorties to his office to find, and re-shelve, some of his treasures.

The professor is survived by his wife of 48 years, Dolores; a daughter Danielle, son Anthony, and one beloved grandchild, Evelyn.

When donors give blood in Prof. Stevens name, please use the code CS42.  I noticed it was listed incorrectly in the article.